Mookata may be the perfect communal meal option (besides hotpot), but be careful where you're placing your cooking equipment.

A Christmas dinner at a mookata joint in Changi quickly turned sour for a group of five friends after a tempered glass tabletop shattered, leaving them with multiple bleeding cuts, reported Lianhe Wanbao.

The sudden explosion took place over an hour into their meal at 555 Villa Thai on Friday (Dec 25), Gerline Ng, one of the victims, told the Chinese evening daily.

According to Ng, a server had just refilled the soup base for the group, which consisted of her, her husband and three of their friends, when the glass tabletop broke into pieces with a loud bang.

"I heard what sounded like an explosion. Then I was shocked to find glass fragments all over me."

Cuts on arms and legs

Still in shock, she only stood up and moved away from the table after her husband and friends called out to her, Ng recalled.

She sustained cuts on her arms, thighs and calves, while her husband was bleeding from a cut on his leg.

The staff rushed over and apologised profusely to them, explaining that the mookata pot could have overheated the tabletop, Ng said.

However, according to her, it was the response from the restaurant's boss that left a bad taste in the group's mouth.

First off, the restaurant staff had not been able to get a hold of him for half an hour after the incident. When they finally spoke on the phone, things did not go much better.

"The boss only just said he was sorry and that it was an accident. Then he said that if we want compensation, we should go see a doctor and claim it from his insurance company." 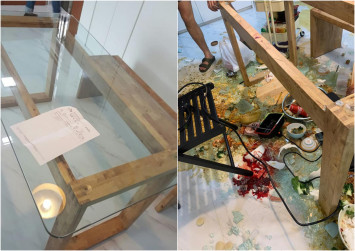 He also rejected their request for a face-to-face meeting, claiming he was too busy, Ng said.

When they offered to wait for him at the restaurant, he allegedly told them to "slowly wait".

According to Ng, as tensions escalated, he even swore at her husband.

"That day, I was busy at another outlet. I suggested visiting him at his home the next day to personally apologise, but he turned me down.

"They asked me to solve the problem immediately or they would not pay."

Addressing the accident, he explained that their tables have experienced wear and tear over the past five years and will be replaced with new marble ones in a month.

The tabletops are made of tempered glass, so even if it shatters, it is less dangerous than regular glass, he also said.

However, Ng disputed his version of events, maintaining in an interview with Mothership that he never offered to meet them at their home.

This isn't the first time cooking equipment and glass tabletops have proven to be a dangerous combination.

Back in January this year, a woman and her friends were left with multiple cuts and burns after her tempered glass tabletop shattered due to the heat from a steamboat pot.

Although tempered glass is stronger than regular glass, uneven heat exposure can still cause it to break.

Speaking to the Straits Times, experts warned against using steamboat equipment directly on glass tables and suggested placing thermal insulators beneath the equipment.

#Product safety #Customer service #F&B #In Case You Missed It