A loud crack in the kitchen recently startled a family living in a flat in Sengkang.

The glass-top stove had shattered without warning, sending shards flying five metres away into the living room.

The sound of the tempered glass bursting apart shocked the family's domestic helper, who was washing dishes at the kitchen sink at the time.

"We did not cook that day so the stove was not hot," the female homeowner told Lianhe Wanbao.

"Fortunately, my children were not in the kitchen when the glass shattered. My 12-year-old often helps with cooking, and my younger son goes to the kitchen quite frequently."

Her family had purchased the glass-top stove in Feb 2017 and started using it in April when they moved into their new home.

"The salesman told me that the stove could last 10 years, but this happened after slightly over two years," her husband said.

The homeowner then contacted the stove distributor on the same day and arranged for a check on the home appliance.

Staff from the manufacturer, however, ruled out a product defect and told her that the glass panel had shattered because of issues with its use and maintenance.

A rusty burner was the cause for the incident, the manufacturer told the Chinese evening daily.

"It is likely the family had neglected to clean the burner thoroughly after spilling soup on it, which led to corrosion over time," he said.

Having recommended the same glass-top stove to her neighbours, the worried homeowner hopes to alert others of such incidents. 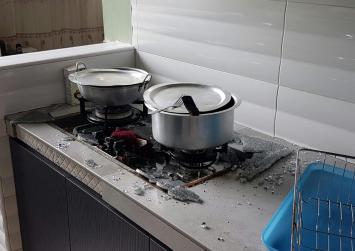 Something similar happened in a Pasir Ris flat in 2017, and investigations by both the stove distributor and the household's gas supplier found that the product was not faulty.

According to Enterprise Singapore, tempered glass is commonly used in glass-top stoves as it is more durable, being impact- and heat- resistant.

However, accidental damage such as placing pots and pans too forcefully on the glass surface may create tiny hairline cracks within the glass panel.

As the cracks widen due to expansion and contraction with each use of the appliance, the tempered glass may eventually shatter.

But cases of spontaneous shattering of tempered glass are not common, glass experts said.