SINGAPORE - The Government has called out The Washington Post for "perpetuating false allegations" after the American newspaper ran only parts of a letter from Singapore's ambassador to the United States.

Mr Ashok Kumar Mirpuri had responded to a Dec 2 article in the online edition of the Post about Facebook complying with the Government's directive to issue a correction under the Protection from Online Falsehoods and Manipulation Act (Pofma) last month.

The article had pointed out that Pofma could have a "chilling effect on online free expression" and "open the door to broad government censorship", points which Mr Mirpuri rebutted.

On Monday (Dec 16) evening, the Ministry of Communications and Information (MCI) made public a letter that Mr Bernard Toh, director of the ministry's information policy division, had written to Washington Post publisher Fred Ryan.

In the letter, Mr Toh noted that the Post had declined to publish Mr Mirpuri's response on the grounds that it only ran letters on articles that appeared in the print edition of its paper. The Government was then directed to the article's author, Ms Cat Zakrzewski.

But Ms Zakrzewski declined to carry the ambassador's response in full, only including a "brief quote" from the letter that ignored the crux of the reply, Mr Toh said.

"It is ironic that the Post should have responded thus, given that your article had accused us of censorship. By refusing to carry our letter or report it more adequately, the Post is perpetuating false allegations."

Mr Toh added that the ministry was making the letter public "in the interest of transparency" and to put its rebuttal on the public record. 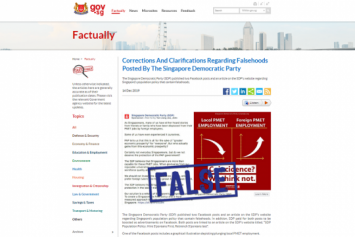 In his letter to the Post, Mr Mirpuri said censorship entails banning or suppressing offending material.

But the Government has "only required Facebook to append to the offending post a link to a factual correction. The original post remains intact," he noted.

"Readers can read it together with the Government's response, and decide for themselves which tells the truth," he said. "This can no more have 'a chilling effect on online free expression' than your publishing this letter can stun The Washington Post into silence."

Mr Mirpuri pointed out that the Post has called out technology companies for publishing and spreading falsehoods online, and warned of the threat this poses to democracy.

Singapore, as an English-speaking, multiracial and multi-religious society open to the world, is more vulnerable to the threat of online falsehoods than most, he added. "Pofma seeks to restore balance to the debate, by requiring tech companies to carry clarifications to reach the same target audience as the false statements."

Part of this response was included in the Post's article. 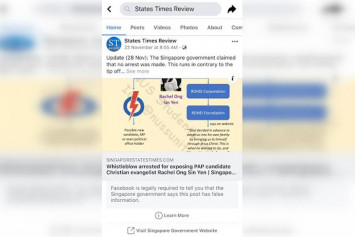 Mr Toh said in his letter that Ms Zakrzewski had "ignored the crux of (the Government's) response: That contrary to allegations that the Singapore government had censored a Facebook post that it deemed to be false, the original post remained intact and accessible".

Mr Robertson was quoted in The Post's article as saying that Pofma is designed "specifically to put Internet companies like Facebook in a headlock to comply with these rights abusing edicts".

"With huge, onerous fines and the possibility of even prison time, it's going to be hard for any company to not comply," Mr Robertson said. He added that Facebook's phrasing of the correction indicated that it was "doing the legal minimum and signalling it is not supportive of Singapore's requirement but it has no other choice".

In a separate letter to Mr Robertson, which was also made public on Monday, Mr Toh reiterated points that Mr Mirpuri made in his response to the Post, including that Human Rights Watch had been invited to appear before the Parliamentary Select Committee on Deliberate Online Falsehoods last year.

The Select Committee was convened to come up with recommendations on how Singapore can tackle fake news, with the public encouraged to write in on causes, consequences and possible countermeasures.

Mr Toh noted that Human Rights Watch had originally accepted the invitation. However, it declined after being told it would also be questioned about a report issued in December 2017, which stated that the Singapore Government was suppressing freedom of expression.

The organisation was offered eight alternative dates and the option of speaking via video-conference, Mr Toh said, but "repeatedly came up with excuses to decline".

He added that the Government is willing to debate the issue with Human Rights Watch at any university forum in Singapore.

"To ensure full publicity for this debate, we will livestream this exchange on Facebook," Mr Toh added. "We hope that you do not refuse our invitation yet again."