We all know how tough working as a food delivery rider amid the pandemic can be, from ensuring deliveries arrive on time and in good condition – some even going the extra mile to handle customer's strange requests.

On Wednesday (May 5), a GrabFood rider posted on Facebook receiving one such request from a customer to put a chicken back into its cage upon arrival.

The post shared how a customer had told the rider to leave the food at the gate. The customer also asked him to help put a live chicken that was mingling along the HDB corridor into its cage – in case the cat eats it.

The post showed the rider posing with the chicken with a thumbs-up seemingly amused at the request as he did not expect there to be a real chicken.

In just under a day, the post has gone viral with almost 6,000 shares and 400 comments.

Netizens found the situation hilarious: some commented on the chicken's calm behaviour while others sarcastically joke about the extra work the rider had to do. 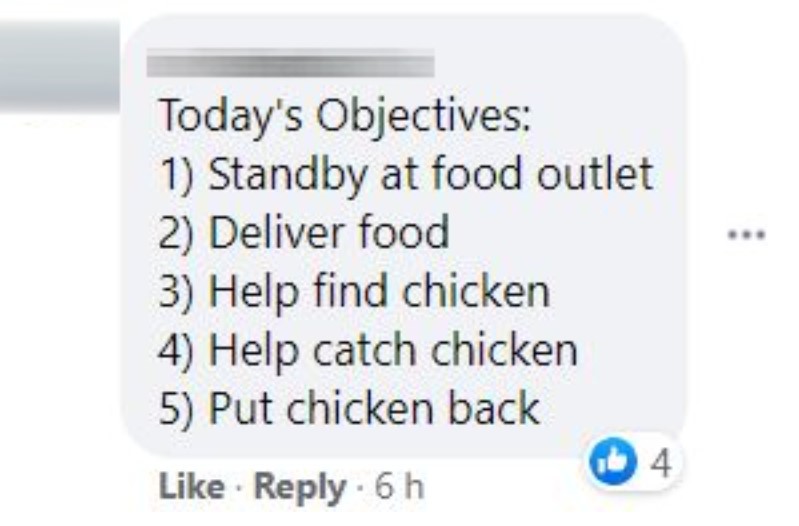 Not to worry though, the chicken is safe. The rider left a comment that he managed to catch the chicken and safely put it back into its cage.

This is not the first time riders have received such weird requests.

Last year, a GrabFood rider received a request to wish the recipient happy birthday upon arrival but instead, he sang the birthday song at the doorstep even recording it to send to the customer.

As the saying goes, not all heroes wear capes, some just don a delivery bag.