SINGAPORE - Insurer Great Eastern Singapore has suspended a financial adviser who is allegedly the National University of Singapore (NUS) undergraduate who had filmed a woman in a shower at a student residential hall on the campus.

It has also identified him as Mr Nicholas Lim, "a Great Eastern financial representative", in a Facebook statement on Monday (April 22).

When contacted by The Straits Times, it would only say Mr Lim had joined the company in August last year.

The company statement said "he has been placed on immediate suspension and has submitted his resignation".

It added that it "strongly disapproves of any inappropriate conduct by our financial representatives and will not hesitate to take the necessary action".

We are aware of the recent incident involving Nicholas Lim, a Great Eastern financial representative. He has been placed...

Members of the public and undergraduates have been calling for harsher punishment against Mr Lim, after the 23-year-old victim, Ms Monica Baey, recounted last week the incident and punishment on her Instagram account. 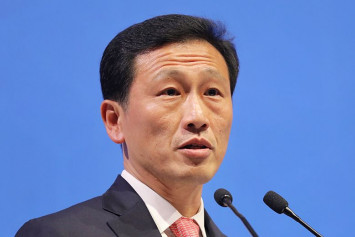 A third-year NUS communications and new media undergraduate, she posted on Thursday and Friday that she had noticed an iPhone being held underneath the bathroom door after she finished showering at Eusoff Hall on Nov 25 last year.

She wrote that NUS had asked the perpetrator to write an apology letter to her and undergo mandatory counselling. He was also banned from entering the hall and suspended from school for a semester.

NUS confirmed last Saturday the police had investigated the case and the authorities gave him a 12-month conditional warning. This means if he commits another crime during the period, he will be charged for that and the earlier offence.