SINGAPORE - As their ship inched towards the naked man clinging to a ring buoy, Captain Cornelis Plugge and First Officer Srdan Bazdan of the Diogo Cao thought he was dead.

They were astonished when Mr John Low lifted his right arm to signal he was alive. The 60-year-old said he was astonished anyone saw him from the ship, which to him looked 10-storeys high.

Mr Plugge, 61, told The Straits Times on Wednesday (June 12): "He looked more dead than alive. His body was swollen, his face was severely sunburnt and dark brown, and the skin on his arms attached to the life buoy had peeled off. His body was in shock."

Mr Low, who drifted in the South China Sea for four days last month following the sinking of his speedboat near Tioman Island, was rescued by crew members of the dredging vessel en route from Nantong, China, to Singapore.

He was travelling from Mersing in south-east Malaysia to nearby Tioman Island for a dive trip on May 4 this year when his boat started taking in water during a sudden storm.

Mr Low had time only to grab a ring buoy and his backpack, which held only his passport and his Singapore identity card, before the boat sank. He had no food or water on him.

After the crew of the Diogo Cao rescued him, Mr Low passed out. When he came to, he heard the reassuring voices of the vessel's Filipino crew.

They had also alerted the authorities in Singapore.

On the night of May 7, he was picked up by the Republic of Singapore Air Force's (RSAF) rescue team, which flew him to Singapore General Hospital (SGH) for emergency treatment. He spent seven days in the Intensive Care Unit and was discharged on May 23.

At 4.30pm on May 7, Mr Bazdan, who was on watch in the ship's bridge 12m above sea level, spotted a bright orange ring buoy floating about 1km away from the ship.

"He saw a longer object connected to the life buoy, but he could not identify that as a person because it was far away," said Mr Plugge, who hails from the Netherlands.

The Croatian first officer immediately informed the captain of the sighting, and the captain ordered the vessel to sail left, towards Mr Low. 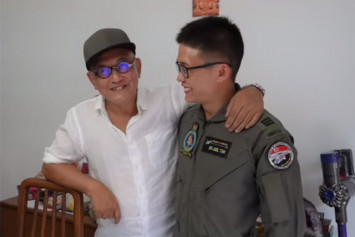 The diving instructor was floating about 128km away from Singapore, said Mr Plugge.

It took just 20 minutes for three crew members, including Mr Bazdan, to dispatch a rescue boat, lift Mr Low into the boat and on board the ship, and wheel him into an empty cabin.

This was the Diogo Cao's maiden voyage, and Mr Plugge had made it a priority to conduct multiple safety drills before the ship set sail on April 29, with all 15 crew members undergoing four "man overboard" rescue drills.

Said Mr Plugge: "Now we know it is really important to conduct such drills. I'm very proud of my crew for acting quickly."

The Diogo Cao was built in the Keppel Nantong shipyard in China, a subsidiary of Keppel Offshore & Marine. The ship is part of a construction engineering company based in Belgium.

On the cabin bed, Mr Low could hardly speak and was slipping in and out of consciousness, said the captain.

"He was barely whispering. I had to bring my ear close to his mouth to hear him. The first thing he told us was that he was in the water for four days."

The captain initially thought there were others stranded too before Mr Low told him what happened.

The survivor, who was suffering from extreme hypothermia, was wrapped in blankets and hooked to an intravenous therapy (IV) bag that gave him essential fluids.

Thank you all my friends and family's prayers and wish and now im recovering well at gleaneagles ward804 but i may not be able to talk much and my face represents Bee Chèe Hianģ dried meat!

Although the crew had some medical training, Mr Plugge sought medical advice from a hospital in Belgium, since Mr Low's condition was rare.

On Mr Low's second night in the sea, he had to strip himself of his clothes because the fabric was rubbing against his badly sunburnt skin. When he was rescued, the crew found that there was no skin left on his arms from the armpits down to the elbows.

Mr Plugge contacted the authorities and coast guards in Malaysia, Indonesia and Singapore, but it was Singapore's Maritime Rescue Coordination Centre (MRCC) that responded well, he said.

A few e-mail exchanges and phone calls later, the MRCC informed the RSAF to deploy its search-and-rescue team at around 8pm.

Since Mr Low had no identity document with him, and because of his condition, it was hard to get much information from him except that he was from Singapore, said Mr Plugge.

The MRCC needed more details about him such as his address before proceeding with rescue efforts, he added.

"At 8pm, I sent an e-mail to MRCC emphasising that Mr Low had been in the water for four days and we did not rescue him for him to die on the ship."

At 9.30pm, RSAF's search-and-rescue team, called Rescue 10, arrived at the scene, and within 30 minutes, Mr Low was hoisted into the helicopter.

Captain Plugge stayed in contact with the rescue team via radio and steered the ship 16km towards Singapore at an agreed location for the helicopter to spot the Diogo Cao.

Since the dredging ship had cranes, antennas and other obstacles, the Rescue 10 had to find enough room on deck to hoist Mr Low into the Super Puma helicopter without putting his or the rescue team's lives in danger, said Captain Neo Wei Keong, Rescue 10's pilot.

The team decided to lift Mr Low from a small area at the left side of the ship.

Aircrew Specialist Nicolas Ong held on to Mr Low, who was strapped to a stretcher, as they were winched into the helicopter.

The full-time national serviceman said: "I had to constantly orientate the stretcher during the winch so that Mr Low's exposure to the sea spray was minimised."

Medical Officer Captain (Dr) Joel Tan, who was part of the rescue team, continually monitored Mr Low on the ship and in the helicopter.

Capt Tan attached an oxygen mask to Mr Low and replenished his body fluids through an IV drip.

"The amount of space in the helicopter is limited. Therefore, it was difficult to move about and perform the medical procedures. But we are trained to adapt to the challenging conditions," said the medical officer.

After the helicopter left for SGH, Mr Plugge said: "First Officer Bazdan and I looked at each other on the deck and I said: 'We saved a life.' It was such a good feeling and we felt satisfied."

The May 7 incident was not the first time Mr Plugge helped to rescue a survivor out at sea.

Many years ago, the captain - who started sailing in 1975 - rescued a person who fell overboard from another ship.

But saving Mr Low was significant to the captain and his crew because they had never seen a person who was stranded for days.

"It takes a very strong man to survive four days in the water. He wasn't even on a raft!" Mr Plugge said.

In an earlier interview, Mr Low said he was thankful to the ship's crew for spotting him from such a distance away.

"I was as small as a bacteria, but this captain managed to locate me. Whoever spotted me must have an eagle's vision," he said.

The Diogo Cao is currently docked in Batam.

On June 19, Mr Low will head to the island to visit Mr Plugge, Mr Bazdan and the rest of the crew to thank them.

The captain, who is looking forward to the reunion, said: "John just got a second life, and he has made an impact on us. We never expected to find someone in the middle of the sea.

"We are very happy to rescue him and to see him fully recovered. We want to see him next week to hear the end of his story."