Rushing to catch a flight is already stressful on its own, but two Singaporeans found themselves having more on their plate after a taxi driver allegedly intimidated them with a knife during a heated disagreement over their taxi fare.

In a series of videos on TikTok, Naomi Tan, 30, documented the entire ordeal, which took place on Monday (July 11) at around 5.45am.

The couple, who was in Bangkok to attend a friend's wedding over the long weekend, had to catch an 8.20am flight back from Suvarnabhumi Airport to Singapore, Tan told AsiaOne.

They stayed at Movenpick Hotel Sukhumvit 15 and the hotel staff had helped them flag down a taxi.

At that point, Tan said the driver agreed with them on a fixed fare of 400 baht (S$15) and he did not switch on the taximeter.

However, upon reaching the airport, the taxi driver allegedly refused to pass Tan her change after she handed him a 1,000 baht note.

She then filmed herself arguing with the driver in a TikTok uploaded on July 11, which has since been deleted.

In the video, the driver could be heard saying "75 baht" and "highway", which Tan retaliated by saying: "No, you said 400 and no highway."

After an argument over the change, the angry driver went back to his car and could be seen pulling out what looks like a sheathed knife from the door of the driver's seat.

"He took out a f***king knife," Tan exclaimed in the video.

"When he pulled out the knife, I was quite stunned, but given it was such a public place, we pursued the matter (by insisting on the change). If he had turned violent we would have just left it. At that point, we were just running with our instinct," Tan told us.

In response to a comment on the first video, Tan created a second TikTok video on Tuesday (July 12) when the police got involved.

@ntannyy Reply to @jahansoozy he quoted us 500 baht first then said 400 baht but he wouldn’t take the highway. We didn’t have small change so when it came to paying and he asked for 400, he took the 1K baht note and refused to give us any change. On the highway he stopped on the road shoulder next to a stationary car due to a “taxi accident” but we told him to continue driving #bangkok ♬ original sound - NT

The four-minute clip, which garnered over 143,300 views and 195 comments, started off with the driver taking out what looks like a knife and it also showed the heated confrontation between Tan, the driver and the police.

During that exchange, the couple accused the driver of stopping halfway during their journey to pick up other passengers.

She also said the driver had stopped on the road shoulder next to a stationary car due to a "taxi accident" and the couple had to tell him to continue driving.

In her third and fourth TikTok video, Tan shared that they had gone to the tourist police to report the incident, sharing the taxi's car plate number, a clearer picture of the driver and a screenshot of an email she received from the Suvarnabhumi Airport Police two days after the incident.

In the email, the police said they had contacted the taxi driver and he was taken to the Suvarnabhumi Airport Police Station to be investigated for being armed in public.

The police also said they informed the Department of Land Transport about the incident.

In the clip, Tan reflected on the incident and shared that she would refrain from booking such an early flight in the future as she feels that "funny things" can happen after dark.

She also recommended that people should be "on guard the whole time".

"We were trying to get some sleep on the cab and now, thinking back, that is so crazy, knowing that he was driving with a knife next to him," she said, adding that the incident would not deter her from going back to Bangkok.

Apparently, this isn't an isolated incident either.

In the comments section of one of the videos, a netizen shared that he too experienced something similar with that same taxi driver.

He said that driver agreed on a fare of 500 baht when he boarded the taxi and while he was driving, suddenly said he needed to pay 200 baht more for the highway toll gate.

When he reached his destination, the netizen hesitated to pay and the driver also allegedly pulled out a knife to threaten him.

Some netizens, presumably living in Thailand, also shared their own experiences online.

One netizen said that ever since tourism has resumed, the taxi drivers have "turned crazy" and they personally have experienced several problems with drivers even though they live there.

Another also mentioned that despite being Thai, he does not speak the language very much and people have tried to "take advantage" of him even though he is not rich. 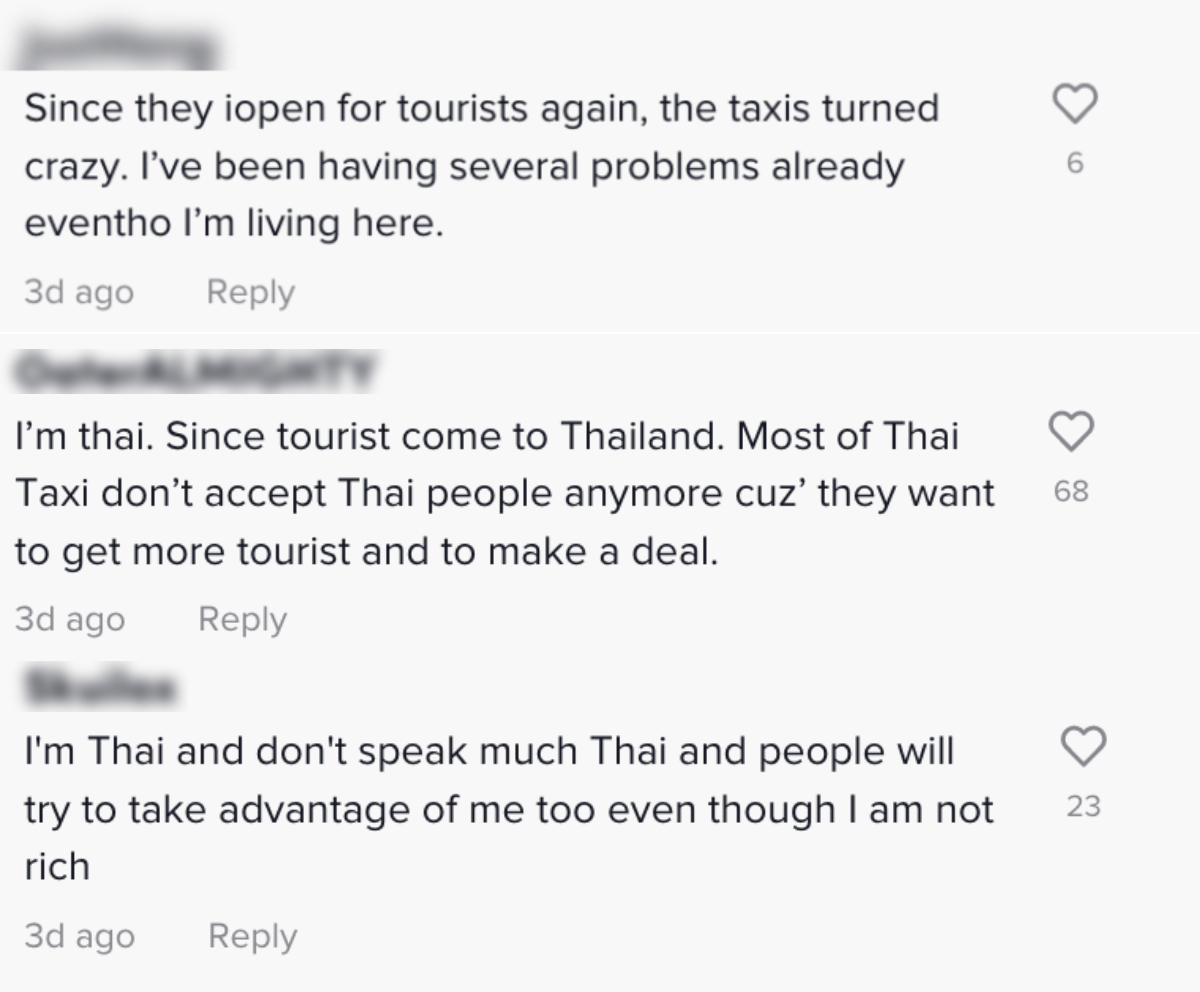 According to the Ministry of Foreign Affairs, if you are a victim of crime in Thailand, you should make a report to the Thai police as soon as possible before leaving the country.

This isn't the first time Singaporeans have encountered such taxi drivers overseas.

In May this year, a group of Singaporeans travelling to Bali got a rude shock when they saw their taxi driver scaling the walls of their rented villa.