Husband saves wife's life by donating his kidney to her

Mr N. Arumugam donated a kidney to his wife, Madam Saras Adiya, as she was diagnosed with polycystic kidney disease in 2013.

For the last 40 years since they got married, Mr N. Arumugam has been giving his wife either a piece of jewellery or a bouquet of flowers every Valentine's Day.

This year's Feb 14 was different: He gave her a hug instead.

The hug was special. It came with deep emotions and a lot of relief as the 66-year-old had feared he would lose his wife, Mrs Saras Adiya, after she was diagnosed with polycystic kidney disease.

He was overjoyed that his 60-year-old wife is now hale and hearty.

And it is thanks to the kidney he donated.

"Married life is not just about sacrifices. It is about giving in to each other to make it work," he told tabla!, a weekly English language newspaper published by Tamil Murasu.

"There is no room for egos and, along with patience, one must develop the resilience and fighting spirit to see through challenges together."

The couple had faced several challenges since they fell in love and tied the knot in 1979.

They faced the struggles of young parents raising children after their daughter, Umavathy (now 39), and son, Uthayakumaran, (now 34), were born.

Read Also
In sickness and in health: The love story of a couple married for 72 years 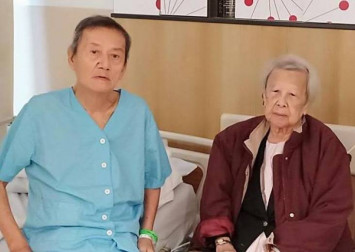 After sending the children to school and completing her household chores, Mrs Saras would assist her husband with his business, running a flower shop he started near their HDB flat in Yishun, 30 years ago.

However, Mrs Saras was diagnosed with polycystic kidney disease in 2013.

It is an inherited disorder where cysts develop in the kidneys, causing them to enlarge and lose function over time.

Mrs Saras followed up with medical tests and drugs but her condition did not improve.

Three years ago, her doctor suggested that she undergo kidney dialysis. But she was not in favour of it as the condition did not affect her lifestyle. She was able to go to the market daily, meet friends regularly and attend social functions.

But her condition began to deteriorate and the doctor told her family members that something had to be done quickly or she may die.

An option was to have an immediate kidney transplant, but this was possible only if a matching donor could be found.

"Dad has just too much love for mother but he is someone who doesn't express his love openly," said Mrs Umavathy.

"But on hearing this news, he wanted to save her at all costs and was the first in the family to volunteer and offer his kidney."

Though they were told about the risks that could arise after the transplant, the couple were determined to do it together.

They were warned that a failure in tests would mean the whole process being called off.

From the middle of last year, Mr Arumugam went for numerous tests to assess if his kidney was suitable for donation.

It took a toll on his finances.

"I was rather calm about the whole situation and went about life normally," said Mrs Saras.

"It was a tense period for my husband as he had to manage his business and go for the medical tests.

"Despite the fear of losing me, my family members were positive and were there to take me for medical appointments."

Thankfully for the couple, after a gruelling six months of intensive tests, they got the green light to proceed with the transplant.

In December, Mrs Saras underwent a successful kidney transplant at a local hospital, the surgical procedure cost the family $20,000, half of which was paid by Medisave.

She considers it a "second chance at life".

The couple today live a happy life along with their children and grandchildren.

They will be celebrating their 40th wedding anniversary next month.