Barely a day after the 'Hwa Chong' woman's YouTube channel featuring videos of her hurling racist remarks at strangers was brought to light, she was fired from her job.

KF Property Network confirmed that it terminated the services of the 57-year-old woman in a Facebook post on Tuesday night (April 27).

"The company maintains zero tolerance for hate speech and racism that threatens the foundations on which Singapore is built," it said and thanked those who brought her actions to their attention.

One of Knight Frank’s core values is to be a Responsible business to People and the Community. The company maintains...

A check on the Council for Estate Agencies' public register on Wednesday showed that she has been delisted as a property agent.

Her YouTube channel was also terminated for violating the platform's harassment and cyberbullying policies.

"We have strict policies that prohibit harassment on YouTube, including content that maliciously insults someone based on their race, gender expression, or sexual orientation," a YouTube spokesperson told AsiaOne.

Read Also
Who's harassing who? 'Hwa Chong' woman has dedicated account filming passers-by and accusing them of harassment 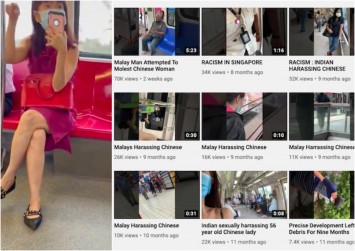 "We quickly remove content that violates these policies when flagged."

The 'Hwa Chong' woman sparked an uproar on April 22 after she accused several passengers of harassing her on the train, although one of them said she was unprovoked.

A viral clip on Twitter showed her filming them with her mobile phone and asking them about their race and their educational background while she prattled on about being a graduate from the former Hwa Chong Junior College.

It resulted in an online backlash, with many slamming her for being elitist and racist. Her social media accounts were also dug up, unveiling a trove of self-recorded videos on her YouTube titled along the lines of "Malay/Indian harassing Chinese".

The police told AsiaOne that reports were lodged in relation to last week's incident, and the woman is currently assisting with investigations.