While many of us work from the comfort of our homes in the rainy weather, food delivery rider often find themselves having to brave the elements so we can fill our stomachs.

A woman, Petrina Ng, took to Facebook on Monday (July 11) to post about her encounter with a food delivery rider in Balestier. She shared a photo of a young man cycling in the rain with a Grabfood delivery backpack on.

He sighed, shook his head in resignation and rode out in the heavy rain. Met this young man when I was at Balestier...

Ng wrote that while she was taking shelter from the downpour, she spotted a delivery rider who had just collected his customer's order. He sighed and shook his head in resignation before making his way to make the delivery, she said.

"It's true that they are paid, but it's not an easy job and it's certainly not a lot of money… at times, it's dangerous even… as the young man rode away, I felt worried for him."

The woman also urged others to be kinder to delivery men.

"If the item comes a little late, a little wet, a little less than what I expect, I'll remember to give and take," she concluded before thanking delivery riders.

Commenting on Ng's post, netizens empathised with the challenges that delivery riders face during wet weather, with one writing: "Not easy money... let’s all show some kindness…"

Delivery personnel like the rider Ng had seen may be getting caught in the rain more often lately, with the Singapore Meteorological Service Singapore (MSS) predicting more thundery showers in the first two weeks of July.

Read Also
Stories Behind The Mask: Food delivery rider shows how the Covid-19 pandemic changed the way she works 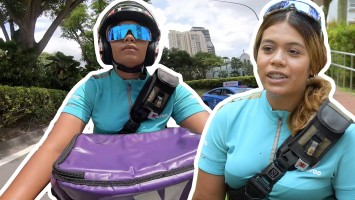 It showed the former repeatedly saying "hurry up" and asking "what are you people doing" to a delivery rider who said that he was drenched by the rain. “I will try to speed things up but I won’t rush on these slippery roads,” the latter explained.

In a similar incident last November, a delivery rider was seen walking barefoot in the rain while carrying the items he was supposed to deliver, sparking a debate online.

Some netizens argued that people should not order food when it is raining for the safety of riders while others said doing so would harm the riders' income.

According to GrabFood, when there's heavy rain, riders can mark themselves unavailable. If they have a pending order, they may complete the delivery once the weather improves.