'I miss you, why didn't you call me?' Gojek driver, 50, suspended after flirting with 10-year-old passenger

Dressed in her swimming costume, a 10-year-old girl hopped into a Gojek car alone to travel to her swim class on Aug 27.

But little did her parents know, the 50-year-old driver would keep in touch with their daughter over the next three days through a series of flirtatious messages on Facebook.

The girl's father, 41, told Lianhe Wanbao that he and his wife decided to book a private-hire vehicle that day as they were too busy to take her to swim class.

While using his tablet on Aug 30, he received a message from a mysterious man asking his daughter if she could meet him after her tuition class that night.

“My wife and I both know who her friends are, and we’ve never seen this person's name before. It felt really weird," the girl's father said.

When he and his wife found out that the Gojek driver had given their daughter a note with his contact number during the ride, they were alarmed.

The anxious parents later discovered the intimate Facebook messages the man had sent to her, such as “Do you miss me?”, “Why didn’t you call me?” and “I want to meet you”. 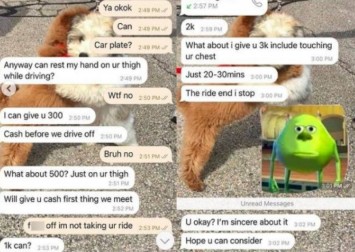 After chatting with the driver using his daughter’s account, the dad found out the true age of this ‘uncle’. He was 40 years her senior.

The parents decided to make a police report and alert Gojek about the incident.

In response to AsiaOne's queries, Gojek said on Tuesday (Sept 7) that they are aware of this case and have been in touch with all parties involved.

The ride-hailing company’s spokesperson said: “The behaviour demonstrated did not meet the standards that we expect and we’ve taken the decision to permanently suspend the driver from our platform.”

Gojek added that they will continue to liaise with the police and other authorities as needed.

Speaking to the Chinese evening daily, the girl's mother said her outgoing daughter had thought the private-hire driver only wanted to be friends with her and did not expect him to ask her out.

“After explaining to my daughter (about the dangers of meeting a stranger by herself), she became frightened and started having nightmares”.

After this incident, the worried parent said that she would make time to ferry her daughter in future.

The police confirmed that they are looking into the incident.

ALSO READ: Gojek driver allegedly forces 11-year-old out of car at night for having a pet bird with her