A man's morning walk at the Singapore Botanic Gardens went downhill after he was attacked by otters on Nov 30.

Graham George Spencer was near the park's entrance at Taman Serasi when he spotted the creatures in the path to his right.

He told Today that a runner had cut into the otters' path and aggravated the animals which went from "being quiet to going crazy like dogs".

Spencer received tetanus shots and oral antibiotics at the nearby Gleneagles Hospital and his medical bills thus far have come up to $1,200.

The National Parks Board has contacted Spencer with regards to the matter, Tan Puay Yok, group director of Singapore Botanic Gardens, told Today.

“Visitors to green spaces should be mindful of their surroundings, observe wildlife from a safe distance, avoid feeding or approaching them, especially when there are pups as the adults can be protective over their young when approached by humans," Tan explained.

Read Also
'I was glued to the spot': Elderly man attacked by otter along Kallang River 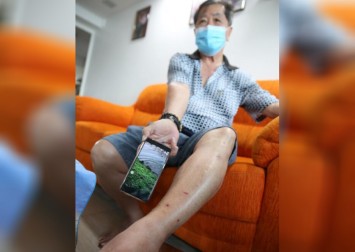 In recent months, there have been several reports of otter attacks in Singapore.

On May 13, a man was bitten by an otter during his morning exercise along the Kallang River and cautioned residents in the area to watch out for the animals.

Last December, a woman suffered foot injuries after a family of otters "charged towards" her while she tried to take a video of them at Gardens by the Bay.

NParks' advisory says that members of the public should not touch, chase or corner otters as it may frighten them. They should also refrain from talking loudly or using flash photography as noise and light may provoke the animals.