Ikea amends job listing: Earn up to $14k instead of $22k as a manager

Not too long after word got out that Ikea Singapore appeared to be offering up to $22,000 per month for a selling manager role, their listing on government website MyCareersFuture was edited to show a maximum salary of $14,250 instead.

It's still a large sum of money, though nowhere near as grand a paycheck as previously advertised.

Speaking with AsiaOne, Corinna Schuler, the Head of Corporate Communication at Ikea Southeast Asia, clarified that it was an administrative error and that "the salary range posted initially was incorrect."

"We corrected our job listing and apologise for any confusion this may have created."

She added that the gross monthly salary reflected in the job advertisement is a way to provide candidates with an indication of the full salary potential, but the actual offer would depend on the candidate's experience and expertise.

The successful candidate will be part of Ikea Singapore's national leadership team, working closely with other sales leaders and managers from its two existing stores and its upcoming store in Jurong, Schuler added.

There are more requirements listed, all of which can be found here.

Read Also
Earn up to $22k per month as a manager at Ikea Singapore, according to job listing 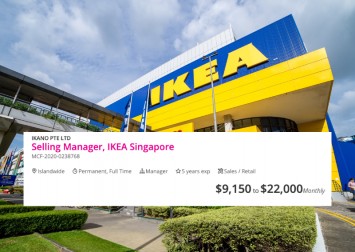 Hopeful candidates ought to send in their applications soon — in the past four days, applications for the role have tripled. With applications still open for another two weeks, it's fair to assume that competition will be stiff.

Ikea is also looking to hire 200 employees to fill positions for its newest outlet in Jurong, set to open next year. Those interested can check out their recruitment drive via this website from Wednesday (Oct 14) onwards or simply send in their resume to recruitment.jurong@ikano.asia.