Tangs clarified it had launched internal investigations, as well as contacted Wee, immediately after learning about the incident and expressed their regret for his experience.

AsiaOne understands the security officer had only asked Wee to move away from where he had been speaking with the staff due to crowd control concerns.

The officer also did not follow Wee as he entered the department store. Instead, he approached a small crowd that had gathered near Wee, asking them to disperse so they would not to disturb the other customers.

"Due to the crowd, our security officer had to raise his voice when speaking and we understand how it could have been read as rudeness," the spokesperson said.

"We have since spoken to not just our security team, but to remind all frontline employees to ensure that they treat all customers with dignity and respect."

Wesley Wee is a published author who suffers from cerebral palsy, but in the eyes of security staff at Tangs department store, he was just a wheelchair-bound beggar and chased out of the department store.

"I'm not a beggar," he lamented in an interview with Lianhe Wanbao.

The 40-year-old recounted how he had gone to Tangs at Orchard Road on Sunday (Nov 22) to buy some household products when he encountered the security officer.

Seeing there were several pop-up booths in front of Tangs, he went over to take a look before deciding to purchase from one of them. However, the booth owner ignored him, Wee said.

Knowing that his condition left his speech unclear, he typed out his request — to pay for an item through PayLah — and approached a pair of cashiers for help.

He was rejected by one of them before they even read his message, while the other apologised and said they did not accept payment via PayLah. 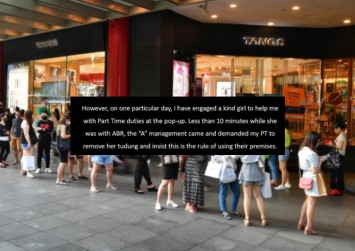 He claimed that a security officer had approached him, telling him not to beg for money.

Wee was startled but believed it was just a misunderstanding and attempted to explain himself. Unfortunately, he said that the officer paid no heed and continued to chase him away.

As he wheeled himself into the department store, he alleged that the officer trailed behind him and told him not to disturb the others.

Unwilling to make a scene, Wee left, though he dropped a message to his wife, Lorena, informing her of what had happened. She then asked a friend who was in the area to head over and assist him.

By then, the security officer and the staff manning the booths had left. In their place was a female cashier.

Upon learning of Wee's experience from his friend, she informed a Tangs manager as well as the head of security of the matter. Both immediately came forward to apologise to him.