Vekaneshvari Jayabal wrote about her father's experience at Sri Thendayuthapani Temple on July 19 and accused the temple of mistreating the 68-year-old man.

In an open letter to the management, she wrote: "We genuinely want to come and pray and not get involved in your caste system.

"If you think that you are a very special caste and have a very closed mindset at a place like in Singapore in 2020 — then please declare to the public that only Chettiars (a caste associated with merchants, traders and bankers) are allowed to enter the temple."

Netizens slammed the Tank Road temple, which is managed by the Chettiars' Temple Society, saying there was no place for caste discrimination in Singapore.

Alerted to Jayabal's complaint, Chettiars' Temple Society said in a statement to AsiaOne on July 21 that it immediately reached out to her for a meeting.

It also conducted an investigation and found what it said were several inaccuracies with Jayabal's account of that evening. 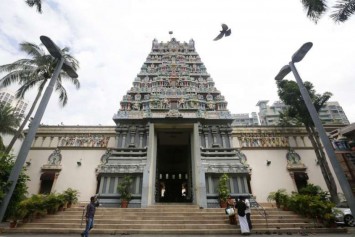 After reviewing CCTV footage and interviewing the staff concerned, the temple's management shared that when Jayabal's father arrived at 7.14pm, an annual pre-booked ubayam (thanksgiving prayers) was in progress.

He, along with other devotees, could not enter the temple immediately due to phase 2's regulations permitting only 50 people to enter places of worship at a time.

Devotees are allowed into the premises on a rotational basis, as per the current norm at all local Hindu temples, the temple's management explained.

10 minutes later, devotees waiting in the queue were informed that they could enter and offer their prayers.

However, Jayabal's father requested for the priest to perform archanai (personalised prayer), so he opted to wait for the session that was scheduled for 7.45pm.

He and others eventually entered the temple at 7.36pm. Instead of waiting for an hour as the woman had alleged in her post, her father waited for 22 minutes, according to the temple's management.

As ubayam prayers were still ongoing after he entered, the man accepted a chair that was given to him. He did not raise any complaints while on the premises.

He left the temple at 8.38pm after completing his prayers.

Chettiars' Temple Society told us: "It is unfortunate that Ms Vekaneshvari Jayabal chose to publish the email that she had sent to our office concurrently on Facebook instead of allowing us to investigate the matter, and also before we could meet with her to share our findings."

It added that other allegations she had made were unfounded.

Jayabal will be meeting the temple's management this evening (July 22).