'Judged by the colour of my skin': Tutor disheartened by families checking on his race

Does the colour of a teacher's skin really matter? Apparently so for one family, who thought it was necessary to enquire about Facebook user Sharyl Lidzhan Sapari's race while arranging for him to be their child's tutor.

"They are also checking your race," his correspondent from the agency he worked under told him. When asked why, the correspondent said: "The parent just wants to let the student know."

"This is not one-off," he wrote in a Facebook post on Thursday (April 22). "It has happened so many times, I know exactly how this will play out."

Based on his past experiences, Sharyl laid out two potential scenarios he foresaw for himself.

The first: he'd turn up to give tuition to the student but would first have to deal with the student's parent making seemingly harmless remarks about his race. Afterwards, his agency would receive a call from the parent claiming Sharyl wasn't a good fit.

The alternative: the student's parent would interrupt the tuition session and request for Sharyl to leave immediately, claiming that something urgent came up. His agency would, afterwards, receive the same call from the parent.

"I tried sleeping on this, but I can't because I'm just sad. Sad that despite all that has been done, my abilities are still judged by my race," he lamented.

"To you, it is just a one-off, a curiosity, something you can dismiss as folly with humour. But to me, it is a lifetime of being constantly looked at and judged by the colour of my skin."

He questioned if he should resign himself to living with "the whirlwind of casual racism".

Netizens quickly offered him their sympathy and support, reassuring him that the parent's question was unacceptable.

"This is unacceptable and blatantly discriminatory," one wrote.

Others also called out the agency for even entertaining the parent's enquiry.

Unfortunately, racism — no matter how casual — remains a problem in Singapore, as pointed out by Education Minister Lawrence Wong early this year. 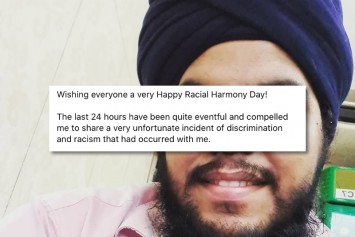 Since 2017, other tutors have publicly shared that they've experienced discriminatory hiring practices by parents. Regardless of their qualifications, they reportedly receive replies such as "Chinese tutor prefer sorry" or "Strictly female Chinese only".

In 2018, a tuition centre made headlines after the head of the centre chased a student and their parent out of the premises with a broom. The parent reportedly had requested for a change in tutor as their child had claimed the classroom was "smelly because of the Indian" teacher.

More recently, a Sikh man named Parvitar Singh received a call from an organisation he applied to, informing him that the organisation would not be comfortable with his turban — a religious headwear the caller described as "the cloth thingy".

According to the Tripartite Guidelines on Fair Employment Practices, race should not be a criterion for the selection of job candidates. Language such as "Chinese preferred" or "Malay speaking environment" is considered unacceptable.