Transport Minister Khaw Boon Wan shared a photo of him in hospital with a cup of coffee next to him after his surgery.

In a Facebook post on Friday, Mr Khaw, 66, said that he went into the operating theatre at 8am and came out at 11am.

"The operation was uneventful," he said.

He added that he had started fasting the night before his surgery and so he felt hungry, adding: "I suppose that's a good sign."

Mr Khaw, who is on extended medical leave and currently warded at the Singapore General Hospital, also shared a photo of himself in hospital with a cup of coffee next to him.

He wrote in his post: "I deliberately stayed away from coffee last week in case it kept me awake. Now that surgery is over, I have just given myself a treat - a nice hot coffee!"

On Wednesday, Mr Khaw thanked well-wishers, adding that he was "fully prepared" for his operation.

"I'm in the best of hands and looking forward to a full recovery," he added in the Facebook post.

He also said that his accident at home was a timely reminder that it is important for senior citizens to "never jump out of bed". 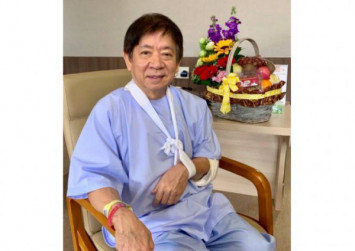 Mr Khaw will resume duties when he is able to do so, probably after several weeks, the Prime Minister's Office (PMO) said in an earlier statement.

Meanwhile, Foreign Minister Vivian Balakrishnan, 58, has stepped in as Acting Transport Minister to ensure that "ongoing discussions with Malaysia on several transport matters will continue to be well coordinated", the PMO statement said.

Senior Ministers of State for Transport Lam Pin Min and Janil Puthucheary, with Senior Parliamentary Secretary for Transport Baey Yam Keng, will help Dr Balakrishnan in the parliamentary debate on the spending plans of the Transport Ministry.

The other MPs in Mr Khaw's Sembawang GRC will be covering his duties in the constituency, including attending his Meet-the-People sessions.