'The loss that we incurred is unimaginable': Unpaid for months, vendors rush to Robinsons to take back goods

Robinsons bowing out after 162 years of operation here caught many Singaporeans by surprise, but it would appear that the businesses that have been working with Robinsons were also in the dark about the retailer's exit from Singapore.

Tableware store Lovera Collections took to Instagram yesterday (Oct 31) to share their difficulties on their interactions with Robinsons since the liquidation was announced.

Speaking to AsiaOne, owner Vera Ong, 34, shared that she had learnt about the news from The Business Times in the morning on Friday (Oct 30).

This was when she went to check and discovered that she had not been paid for her August and September sales. When she tried to get in touch with her usual contact from Robinsons, she was informed the person was no longer working for the company.

Though she has since gotten back her existing stock, Ong stated that Robinsons still owes her approximately $6,000 in unpaid sales figures.

It was only in the afternoon that the liquidators sent an email to let the businesses who had goods on consignment in Robinsons know that the company was going to be liquidated.

“They asked us to support them by continuing to sell our products in the store," said Ong.

"They also gave a date for a creditor’s meeting at end November and a form to fill in for the amount they owed us."

That was when she decided to take action to retrieve the remaining stocks that she had in The Heeren. She was initially told that the liquidator had to give approval on Friday, but as they were not contactable, she went down on Saturday and managed to bring back nearly 250 pieces of tableware that had been consigned with Robinsons, approximately $5,000 in retail value.

Another vendor who is owed a “substantial amount” is Intero Enterprise Pte Ltd, a wholesaler of bed linen and menswear. Owner Patrick Goh, 59, shared with AsiaOne that his company has not been paid for sales made in September and October.

“I have been emailing the finance department since October for the payment but there has been no response,” he said, adding that “the loss that [his company] incurred is unimaginable.”

As his company has been in business with Robinsons since 2006, he was caught unaware by the sudden closure. This was also because the staff at Robinsons had been discussing promotions and sales for Black Friday, Christmas and Chinese New Year with him, hence he was under the impression that it was business as usual at Robinsons, and these conversations were taking place well into mid-October.

He went down on Friday to remove all the items that belonged to his company from both Raffles City and The Heeren and while the liquidator had tried to stop him, after he showed documents proving that he owned the goods, he managed to get them back from the stores.

“This has been rather disorganised as we were not informed ahead of time that we need to show proof of ownership before we would be allowed to take the goods that belong to us," he told AsiaOne.

Read Also
'There will never be another Robinsons': Shoppers and staff bid farewell to Orchard Road icon 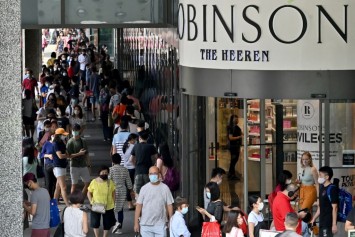 “They were planning for Black Friday sales [with me], and all so honestly, this was all very sudden, even to the staff,” said Bey.

After hearing that other vendors had taken back their stock, she went down to Robinsons stores earlier today (Nov 1) and retrieved her products.

Said Bey: “It was a lot of confusion and we were getting bits and pieces of information from people everywhere. I decided to [take my goods back] because I doubt I will be paid for the last two months and the current sales.”

For both Ong and Bey, this is not the only company that they have worked with that has gone into liquidation this year. Ong noted that she is still owed $3,000 by HonestBee and Bey was informed at a liquidation meeting that none of the vendors would be getting paid by Gallery & Co. Both companies announced their closures earlier this year.

Robinsons’ appointed provisional liquidators, KordaMentha, shared with AsiaOne that they are “currently assessing options to preserve the value of Robinsons’ assets and maximise returns to creditors”.

While declining to comment directly about Robinsons, KordaMentha director Hamish Bull said, “In liquidations, creditors often have amounts outstanding for a significant period of time.”

AsiaOne has reached out to Robinsons for their comment.