This made my day: Bus driver spotted sheltering passengers on a rainy day shares reason for doing so

He was praised for going the extra mile to keep his passengers dry during a heavy downpour. But for 59-year-old bus Segar A. Subramaniam, it's all in a day's work.

Segar was shown sheltering passengers who were boarding and alighting SMRT bus service 972 at Far East Plaza in a video recorded by a bystander. The incident was said to have occurred last Sunday (Feb 6).

In the clips, the bystander wrote that what Segar did "made my cold rainy day feel so warm".

When interviewed by Shin Min Daily News regarding his heartwarming act, however, Segar simply laughed and brushed it off as being part of his job.

"As bus drivers, we always try our best to make the journey as enjoyable as possible for passengers," he added.

The former deliveryman, who joined SMRT as a bus captain only about five years ago, said he has always made it a point to shelter his passengers with an umbrella whenever it rains heavily.

He added that the 972 bus route, which starts from Bukit Panjang, plies through the heart of Singapore's shopping district, Orchard Road. But due to the structure of the bus stops in the area, buses are not able to stop close to the bus stop shelter. "Once it rains, passengers will get wet," noted Segar.

He shared that his habit of sheltering passengers probably started due to an incident he witnessed as a passenger before he joined SMRT.

He recalled how a fellow male passenger almost slipped and fell when boarding the bus one rainy day. He noted that the man wasn't carrying an umbrella at the time and the bus captain also didn't have umbrellas prepared.

The incident left a deep impression on Segar.

From photographer to subject 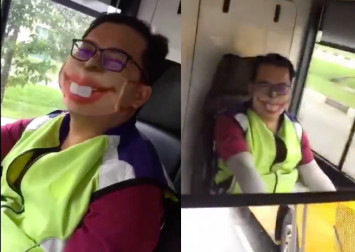 As a former wedding and commercial photographer in a career which spanned 35 years, Segar never thought he would one day find himself in front of the camera lens.

He revealed that when his enthusiasm faded for photography, he tried to find other avenues to earn an income. He responded to SMRT's recruitment advertisement after quitting his job as a deliveryman.

Segar added that his current job gives him a sense of fulfilment and he has met many kind instructors as well as supervisors who trust him.

"I'll most likely remain in this job until I retire," said Segar.

#SMRT #Buses #This made my day #Inspiration #kindness