This made my day: Kiss92 FM fan wakes up from coma after hearing personal message from DJs

For one man, his 23 days in a coma remain a fog. But he remembers dreaming of three things — his wife, his proposal and DJ Maddy Barber's voice.

After slipping into a coma due to a fall at home, Jeffrey woke up on Sunday (Nov 29), just days after receiving a shoutout from Barber as well as fellow Kiss92 FM DJs Andre Hoeden and Divian Nair, the radio station shared in a touching Facebook post.

Knowing that Jeffrey would listen to Kiss92 every morning, his son Jasper had called in to the station on Nov 26, appealing for them to say a few words to his father.

Jeffrey's doctors had advised him to expose his father to familiar voices, Jasper explained.

The trio also made sure to play Jeffrey's favourite song, (Everything I Do) I Do It For You by Bryan Adams.

Lo and behold, Jeffrey came to in the wee hours of the morning on Sunday, Jasper shared in another call with the DJs.

At the time, he was watching a football game while keeping vigil at his father's bedside.

"I felt that someone was calling me, I got a shock. I thought it was those eerie things in the hospital," he recounted. 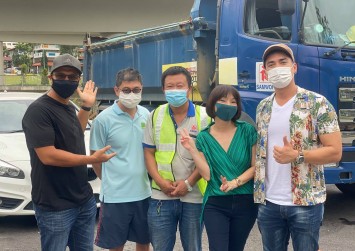 According to Jeffrey, he had dreamt of his late wife and the scene of his proposal during his coma.

"Then suddenly I heard someone talking to me. I heard Maddy's voice," he recalled.

Amazed, Barber commented that the trio had been hoping for Jeffrey to wake up, but "didn't dare to expect."

"You hear about things like that, where people are in a coma. You need to talk to them, but at the same time, you're not so sure if it does anything at all," she added. "But you are living proof."

Jeffrey is still "a bit weak", he admitted, but is happy "to be back".

Concluding the call with a moving message to his son, Jeffrey's voice broke as he said, "I'm happy that you stayed by Daddy's side. In fact, Daddy never thought that Daddy would wake up."

This isn't the first time the father-and-son duo have had a tear-jerking moment on the show.

Earlier this year, Jasper had written in to the show to ask them to give his father a call on his mother's death anniversary as he had to be in camp on the day.

His father has raised him single-handedly since his mother died when he was six, he said.

[MUST-WATCH!] Arguably one of the most amazing moments in our radio history! Never in a million years did we think we'd...

#Inspiration #kindness #Family #This made my day