This made my day: TikToker makes migrant worker colleagues smile with thoughtful gifts

With the warm weather these days, many of us would work from home with the air conditioner on, however, migrant workers aren't as lucky.

TikTok user @notjamuslim recently decided to treat some of his colleagues — who have not tried Starbucks before — to a cold drink on a hot day.

In a clip on Monday (June 28), the first worker was seen taking a sip of the drink, saying it was nice and rating it a seven out of ten.

A second worker sighed in satisfaction after giving tasting the drink, saying it was cooling on a hot day before rating it a solid 10 out of 10.

The last worker appeared to enjoy the drink, taking multiple sips before smiling widely and rated it a 10.5.

This was not the only time the thoughtful man had gone out of his way to make his co-workers happy.

Another video uploaded on May 19 showed him getting one of his co-workers a new Iron Man backpack after noticing that he was an Avengers fan and that his old bag was overused.

Oher videos on his TikTok page, now made private, showed the young man getting along well with his colleagues.

Read Also
This made my day: TikToker whips up hot meals for migrant workers working in the rain 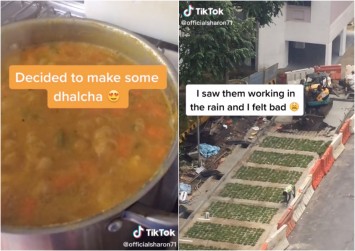 Besides him, other Singaporeans have also lent a helping hand to migrant workers amid the pandemic.

In June, Tiktoker @officialsharon7 whipped up a hot meal for a group of migrant workers after witnessing one of them working in the rain. She filmed the cooking process, showing a large pot of dalcha — a lentil-based curry — simmering while she fried some hot dogs and eggs.

Over the past few years, volunteers from ItsRainingRaincoats, a local initiative that helps migrant workers in need, have been collecting and distributing items such as food, care packs and electrical appliances.

"We are so grateful to all our amazing volunteers — from the littlest to the oldest — for this untiring effort," the group said in a recent Facebook post.

#TikTok #Foreign Workers #This made my day