This made my day: Video of Malay boy greeting Chinese neighbour with oranges during CNY warms hearts

Chinese New Year might be a quieter affair this year, but that didn't stop this Malay family from bringing a little cheer to their elderly Chinese neighbour.

In a Facebook video posted on Feb 12, six-year-old Umar Shahrizal was seen greeting the granny at her door with two mandarin oranges, which signify good fortune in Chinese culture, in each hand.

The woman was visibly touched at their thoughtful gesture. She thanked both of them, and the three neighbours exchanged wishes for prosperity before heading back to their houses.

In his Facebook post, Chef Bob shared that he wanted to "give her something different" this year, so he asked his 58,000 followers to come up with some suggestions.

What surprised the father-son duo, however, was that the granny appeared at their door moments later, gifting them a bag of goodies as a show of her appreciation.

She gave a red packet to the boy, as well as snacks such as love letter biscuits, Oreos, oranges and chips, said Chef Bob despite his insistence on not expecting anything in return.

The phrase "Like father, like son" also rang true as Chef Bob cheekily shouted Chinese New Year greetings and words of affection to his neighbour as she returned to her house, with his son mimicking along happily.

This friendly exchange is just one of many since Chef Bob and his family moved to their Pasir Ris home six years ago.

"She made it super easy for us to settle in our new home then", he recalled in an email interview with AsiaOne.

Both families started this gift-sharing exchange during their respective festive seasons which has since become a yearly tradition. Last May, he shared on Facebook that his family received many goodies and snacks from his neighbour during Hari Raya.

Chef Bob said he is "blessed" for having a neighbour like her, whom he affectionately dubbed Nenek Cina, which means 'Chinese grandmother' in Malay. 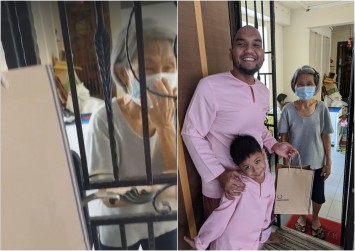 This heartwarming neighbourliness all stems from the desire to be a good role model for his son. "As a father, it is my obligation to instill beneficial and praiseworthy knowledge unto him", Chef Bob explained.

His religious faith also motivated him to show kindness to his neighbours, regardless of their respective faiths, he added.

This mirrored the woman's thoughtfulness, which was seen in the latest video. She asked if he was comfortable with her praying in the common area outside of their houses because "the fengshui was good".

Noting that some have used social media as a tool to spread negativity and hate, Chef Bob shared that he has chosen to spread love and positivity. "There are so many toxic behaviours you can find online. It's good to disrupt it with some good", he said.

In times of crisis, it becomes increasingly important to reignite a kampung spirit that goes beyond race and religion. He hopes that by sharing these neighbourly encounters on social media, these acts of thoughtfulness would encourage Singaporeans to do good to each other.

"[I hope] that [this would have] an impact on their lives. It's a domino effect, like I said previously - love begets love".

#This made my day #Social media #Facebook #Chinese New Year