Man arrested for alleged use of counterfeit $50 notes, believed to have printed his own notes

Six $50 notes which are believed to be counterfeits, a printer, some printing papers and clothing were seized as case exhibits.

SINGAPORE - A 57-year-old man has been arrested for allegedly using counterfeit $50 notes on at least two occasions.

In a statement on Monday (July 8), the police said that they received a report that several counterfeit $50 notes were found near Upper Bukit Timah Road on July 5.

Officers of the Commercial Affairs Department established the identity of the man and arrested him on Monday.

Six $50 notes which are believed to be counterfeits, a printer, some printing papers and clothing were seized as case exhibits.

Preliminary investigations found that the man is believed to have printed several $50 notes with his own printer and used them on at least two occasions to purchase items of low value.

Those convicted for these offences may be jailed up to 20 years and fined.

In the statement, the police reminded members of the public to be wary of receiving counterfeit notes. 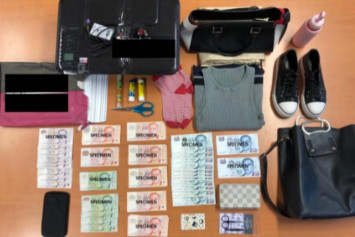 Those who suspect they have received fake currency notes should make a report at any neighbourhood police centre or delay the person who gave the suspected fake note and call the police immediately.

Members of the public should take note of the person's details, including gender, race, age, height, built, clothing, any tattoos, the language or dialect spoken, and the vehicle the person is using, if any, as well as its registration number.

They should also place the suspected counterfeit notes in a protective covering, such as an envelope, to prevent further tampering, before handing them to the police.

Information on the security features of genuine Singapore currency notes is available on the Monetary Authority of Singapore's website.