Edward Goh, who forged two letters to cheat the ministry into disbursing the Covid-19 Support Grant, was jailed for three months.

A man was sentenced to three months' jail last Thursday for forging documents to deceive the authorities into wrongfully disbursing funds designed to help people affected by the Covid-19 outbreak.

Edward Goh, 44, pleaded guilty in court to two counts of forgery for the purpose of cheating.

Court documents state that Goh forged two letters in May to cheat the Ministry of Social and Family Development (MSF) into disbursing the Covid-19 Support Grant to his parents, Madam Tan Meng Lan and Mr Goh Keng Thow.

The grant is meant to support those who have lost their jobs and employees who have been placed on involuntary no-pay leave or have had their salaries reduced by at least 30 per cent for at least three consecutive months. It provides Singaporeans and permanent residents with up to $800 a month for three months if they meet the job loss or no-pay leave criteria. Those who qualify based on their pay cut will receive up to $500 a month for three months.

Applicants also have to submit supporting documents proving their eligibility, such as a retrenchment letter.

On May 5, Goh forged a letter stating that his mother had been retrenched as a kitchen worker in the foodcourt at Ion Orchard mall.

Goh then attached the letter to the online application form, which stated that his mother lost her job on April 7, when she had in fact been retrenched on May 4, said Deputy Public Prosecutor Nicholas Lim.

The DPP said she continued to be paid for April and May, and was provided with an official retrenchment letter only around June 3. 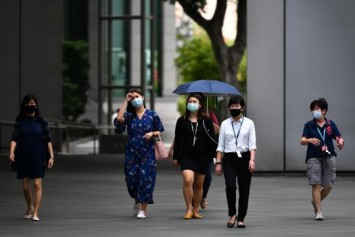 On May 14, Goh created a retrenchment memo purportedly issued on March 1 by his father's former employer, Ee Hui Food Catering. It stated his father was no longer employed by the company then.

DPP Lim said Goh, who was jobless when he committed the offences, then submitted his father's application online with the forged memo attached.

However, the elder Mr Goh had stopped working for Ee Hui on Feb 29, court documents state.

He had also subsequently resigned as a cook at a noodle stall owned by another company and had not been retrenched.

Both forged documents were later determined to be fraudulent by the MSF.

While no money was disbursed to Madam Tan, $800 had already been received by the elder Mr Goh. He has since returned the money.

District Judge Tan Jen Tse granted Goh's request to defer his sentence until Sept 28, so that he can settle his personal affairs.

For each offence, Goh could have been jailed for up to 10 years and fined.