Eighteen Julys on, United, arguably the most supported football club here, finally returned, although this time no Singaporean had to lace up his boots.

Still, when they were in town during the weekend, some in the English team's camp seemed unable to avoid mentioning that night in 2001.

First, Simon Hoppe, the club's Head of Travel and Financial Services Partnerships, recalled the scoreline while segueing into the point that two goals back then were scored by current manager Ole Gunnar Solskjaer.

Then, former star Denis Irwin reminded this reporter in an interview minutes later that he was part of that 8-1 team.

"I think the passion of Manchester United fans is plain to see. I've been to Singapore plenty of times," the 53-year-old said.

"It's fantastic that Maybank puts this on, brings six players in, gives the fans an opportunity to interact with them, see them, because it's not often they get that chance. They'll remember this day."

Dr John Lee, Country CEO and CEO, Maybank Singapore added, "The fanbase is so big in Asia and we are an Asian bank. We wanted to make sure we can reach out to as many customers as we can and obviously Manchester United fans are a big base of that."

Instead of a Singapore side, the Red Devils played and beat Italy's Inter Milan 1-0 in front of a Sports Hub-record 52,897 spectators.

Although Irwin felt that United "probably should have won by more goals", he knows the Premier League will be a different challenge altogether when it kicks off on Aug 9.

"We hope to get off to a really good start.

The ex-defender, who was comfortable playing on both the left and the right, admitted that United's once-mighty defence has to improve, but refused to blame individuals.

At least the backline has been fortified. The 20-time league winners bought full-back Aaron Wan-Bissaka last month and Irwin is confident about his old position.

"(Wan-Bissaka) started really well and looks a tremendous player. We could have them for years to come. And (left-back) Luke Shaw got Player of the Year last year."

He named Dani Alves, David Alaba and Jordi Alba as the best in the world, but believes United's two full-backs will be ones to watch in the years to come.

Given today's transfer market, someone like Irwin has gone extinct. The Irishman cost United a meagre £625,000 ($1.06 million) in 1990, which is approximately £1.2 million today, and went on to win 15 major trophies as a key player.

He has been described by Alex Ferguson as, pound for pound, the legendary manager's greatest signing.

"It's hard when a team like Manchester United come calling because the price automatically shoots up. That's part and parcel of being one of the best clubs in the world. We have to deal with it. It makes transfer negotiations that little bit harder.

"It's just the way the market is. If you want to get a full-back that costs £50 million, you just have to pay, like we did with Aaron Wan-Bissaka, to improve your team."

During his playing days, Irwin was known to be reliable and modest. Now, he is an articulate and measured club ambassador.

Could he be the technical director that United have been rumoured to be searching globally for?

"Absolutely not," he quickly extinguished the suggestion.

"I don't know what the club's gonna do but I quite enjoy doing ambassadorial work with Manchester United and doing media work for other people as well, so it's not a job for me."

Perhaps a lower profile allows Irwin to continue visiting Singapore, a place he admitted to love and "know like the back of my hand".

But he quipped, "It's a lot dearer than England, I gotta say that as well.

One of the card's key benefits was the additional TREATS points whenever the team won a league match. 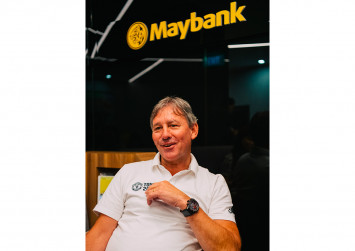 From Aug 1, on top of getting five times the points for every dollar spent, cardholders will get a 1 per cent unlimited cash rebate plus another 2 per cent cash rebate capped at $20.

Fans can continue to enjoy discounts for Old Trafford tour tickets, at its Red Cafe, and at the United Direct Online Megastore, which will also receive the 1 per cent unlimited cash rebate.

Lee said, "This co-brand partnership has boosted our business growth in card products and enhanced our brand positioning."

"Our partnership with Maybank is one of the longest and most successful financial services partnerships the club has had to date, which is testament to Maybank's dedication to delivering engaging and beneficial campaigns for its clients," added Sean Jefferson, United's Director of Partnerships.

This article is brought to you in partnership with Maybank. Check out the Maybank Manchester United Platinum Visa Card here.