Ashley Liew (left) had filed proceedings in June 2019 against Soh Rui Yong over five defamatory statements over an act of fair play.

The long-running legal dispute between the former national teammates began over two years ago in June 2019 when Liew filed proceedings against Soh over five statements over an act of fair play by the former which the latter disputed, the first of which was made in October 2018.

In a statement after the verdict was issued on Thursday morning (Sept 23), Liew wrote: "My family is so grateful for the vindication received through today’s verdict. It has been a long and arduous road since October 2018. We thank God for His continued mercy and grace on us all...

"Moving forward, it is my prayer that we can all heal, for the betterment of sport in Singapore, especially for the values that athletics stand for.

"Thank you to my father, wife, ONE Management, family, friends, and well-wishers who have stood by us during this difficult period. Our deepest appreciation as well to our legal team at That.Legal LLC for their commitment and professionalism."

Soh had earlier in the day, before the verdict was announced, continued to insist in a Facebook post that "to this day I stand by what I said - because it is what I witnessed that day and I would never testify to anything else. I have absolutely no reason to lie".

The trial had started in September 2020 and ended in June. Both parties filed their closing submissions a month later, followed by reply submissions on Aug 31.

Liew had sought a total of $240,000 in general and aggravated damages - in equal amounts - over the five defamatory statements by Soh.

The statements appeared in the form of two blog posts, two Facebook posts, and one Facebook comment. In them, Soh had disputed Liew's account of the latter's act of fair play during the 2015 SEA Games marathon.

Liew, a chiropractor, said that he had slowed down to allow other runners to catch up after they missed a U-turn and took the wrong path. He had finished eighth, while Soh won the race. 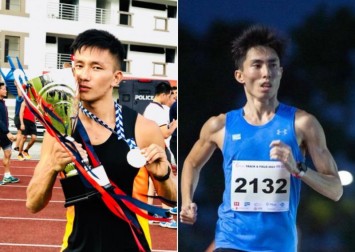 Liew later received two awards for his act of sportsmanship from the Singapore National Olympic Council and the International Fair Play Committee - which awarded him the Pierre de Coubertin World Fair Play Trophy - as well as praise from Cabinet ministers.

Over 10 days in court in September last year and in June, each party called on four witnesses.

Liew had Japanese-Cambodian runner Kuniaki Takizaki, a competitor in the 2015 race, two observers, Kelvin Ling and Jennifer Quek, besides himself, on the stand. Similarly, Soh took to the stand and also had his former coach Steven Quek, his father Soh Seow Hong, and friend Madankumar Balakrishnan.

Takizaki, who spoke through an interpreter and testified via video conference, told the court that Liew was "standing there" as he overtook the Singaporean after the U-turn incident.

However, veteran coach Quek said that based on what he saw, "at no point" did Liew slow down after the U-turn point.

In finding the statements in question defamatory, she also said they are "clearly an attack on Liew's integrity and credibility" and would be taken to mean that "he is a person who lacks integrity."

In their submission, Liew's lawyers accused Soh of "drawing maximum public attention to this case", which they proffered should factor in the damages awarded.

In response, Soh's lawyers called the sum of damages sought "extraordinary" and asked that the case be "wholly dismissed", although in the event that all of the defamatory meanings pleaded by Liew are made out, a more appropriate quantum for general damages would be $25,000, or $5,000 per statement. Aggravated damages, they added, would be only 20 per cent of general damages.

However, District Judge Lee said that Soh's repetition of the defamatory comments and his persistence in pleading justification that is both reckless and unmeritorious, were "most important" in factoring whether or not aggravated damages ought to be awarded.

"On the whole, I am satisfied that Soh's egregious conduct as described above warrants the award of aggravated damages to Liew," she wrote.

Soh Rui Yong alleges on social media that Ashley Liew's version of events at the 2015 SEA Games marathon is "simply not true".

He was reacting to a Facebook post by the International Fair Play Committee (CIFP) - which had awarded Liew the Pierre de Coubertin World Fair Play Trophy - which hailed Liew as a role model.

Soh is served a letter by lawyers representing the Singapore National Olympic Council (SNOC) - which had feted Liew for the act with a special award in 2016 and nominated him for the CIFP award - to "publicly retract and withdraw" statements he made about the marathon.

A week later, Soh is served with a similar letter by Liew's lawyers demanding an apology.

Soh is not selected by the SNOC for the 2019 SEA Games. The SNOC cites "numerous instances" where his conduct fell short of the standards it expects and holds its national athletes to.

He sends legal letters to the SNOC and Singapore Athletics (SA), accusing the former of breaching the "fundamental principles of natural justice" by not convening a hearing or giving him "fair opportunity to defend the allegations". He also accuses SA of defaming him through comments made after his non-selection.

In October last year, he discontinues his suit against SA after the association apologises.

On the first day of trial, Liew takes the stand for 21/2 hours. He is followed by his witnesses, who include another competitor in the 2015 SEA Games Marathon, Cambodian-Japanese runner Kuniaki Takizaki, via video conference.

Soh also takes the stand and among his witnesses is veteran distance running coach Steven Quek.

Soh's appeal against the dismissal of the recusal application is turned down by the High Court.

The trial draws to a close after 10 days in court. Closing submissions are filed on July 27, with reply submissions filed on Aug 31.