After multiple allegations directed at People's Action Party (PAP) candidate Ivan Lim, who has withdrawn from the coming election, another candidate has come out to address one such claim about himself.

Posting to Facebook in the early hours of today (June 28), Shawn Huang recounted the details of an incident at the 2018 National Day Parade, where he was parade commander.

The 37-year-old former fighter pilot said that he was surprised at the post by the warrant officer as he knew her and "felt that it was a misunderstanding".

He has since tried to reach out to her to clarify matters.

The now-deleted post claimed that during one of the rehearsals, Huang turned away food offered to him and threw it on the table in front of her servicemen. She alleged that he was offended by previously being turned away when he first asked. 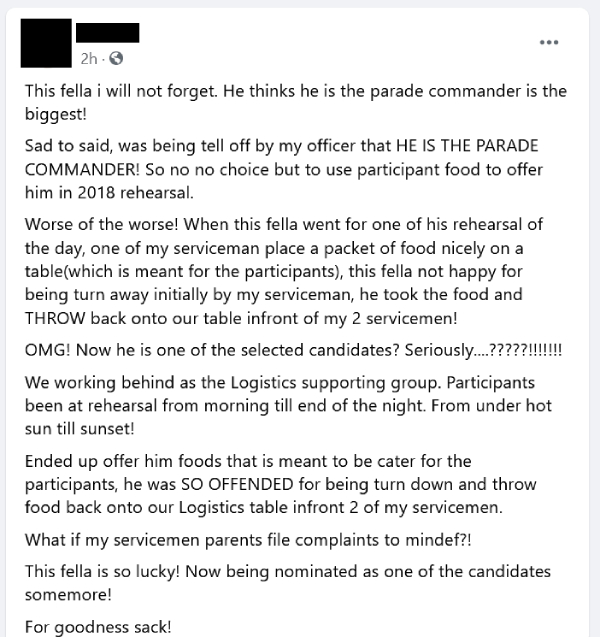 Huang however explained that he had initially asked for a packet of food as no lunch was catered for his group. However, she would not issue him one and he went elsewhere to find food.

After the meal, a new packet of food was offered to him but he said that it was no longer needed and "politely" passed it back to the warrant officer.

He added that the incident was witnessed by two other military personnel. Many other serviceman have since posted messages of support on his Facebook page.

A social media post was brought to my attention, alleging an incident that occurred when I was NDP Parade Commander in...

Huang, the director for enterprise development at Temasek International, is one of 27 new faces unveiled by PAP the past few days. He has been volunteering in Taman Jurong, which falls under Jurong GRC.