Stamping out mozzies may be an essential life skill in Singapore, but before we get too trigger-happy, it's worth noting that not all of them are pests.

As it turns out, the woman — who recently made headlines for killing 323 mosquitoes in one month and collecting their carcasses in meticulously-labelled Ziploc bags — may have killed dengue-fighting Wolbachia-Aedes mosquitoes, according to a statement by the National Environmental Agency (NEA).

The woman, identified only as Jen, first approached Stomp on Dec 7 to complain about the number of mosquitoes around her mother's flat at Block 509 Tampines Central 1.

The problem had started in October, she said, adding that the mosquitoes were affecting her family's quality of life by flying around them and occasionally biting them.

She also suggested that a nearby "overgrown tree" be chopped down as she suspected it was a mosquito breeding ground.

Jen then resorted to "hourly wipeouts" with electric swatters to get rid of the mosquitoes.

Unfortunately, she may have killed more than a few Wolbachia-Aedes mosquitoes, which are specially bred and released by NEA as part of Project Wolbachia, an effort to reduce the number of dengue-causing Aedes aegypti mosquitoes.

The idea of the project is to have the male Wolbachia-Aedes mosquitoes mate with female Aedes aegypti mosquitoes. The latter then go on to lay eggs which do not hatch, effectively suppressing their numbers.

Wolbachia-Aedes mosquitoes are essentially harmless as they do not bite or carry any diseases.

We are releasing mosquitoes into neighbourhoods in Tampines North! But don’t worry – these male Wolbachia-Aedes...

Responding to media queries, NEA explained that Jen's block is located within Tampines East Constituency, where Wolbachia-Aedes mosquitoes have been released since this February.

"We understand the inconvenience experienced by some residents in Project Wolbachia areas, when the male mosquitoes choose to swarm around a certain area, as experienced by the feedback provider."

There has been "a general reduction" in the dengue mosquito population, but the release of more Wolbachia-Aedes mosquitoes is needed to achieve a suppression of 90 per cent of the Aedes aegypti mosquito population and prevent large dengue outbreaks, the statutory board said.

Read Also
Don't do this for an MC: PM Lee tries to get bitten by mosquitoes 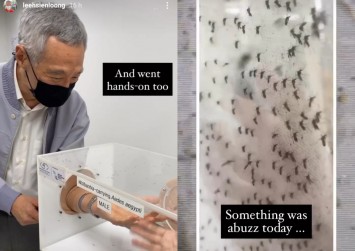 Nevertheless, the Project Wolbachia team will work to minimise the swarming by tweaking the distribution of their releases, NEA assured.

NEA also warned that residents in the area may see an influx of mosquitoes on Monday and Friday mornings, which is when the releases are typically carried out.

It also confirmed its officers had found two mosquito breeding habitats in the area on Nov 24 and Dec 8, and urged residents to be vigilant and remove all sources of stagnant water in their homes.

NEA is in contact with Jen and is working with her to obtain mosquito samples to further investigate the matter, its spokesperson added.

In response to Stomp's queries, Tampines Town Council said it has arranged for the tree near Jen's home to be pruned. It will continue to work closely with NEA on the release of the male mosquitoes, it added.

Speaking to Stomp again on Dec 21, Jen expressed her approval, saying: "I'm so glad that the tree is being trimmed. I hope this helps with the mosquito problem."