Murder of 8-year-old in Geylang: Family members in tears outside mortuary; no wake held

Investigating officers at the residential block in Geylang where the murder took place.

Family members of an eight-year-old girl found dead at her home in Geylang were visibly distraught as they received her body from the mortuary on Thursday (Aug 12), Shin Min Daily News reported.

The incident had occurred in a residential unit at Geylang Lorong 31 on Aug 10.

Based on reports, police officers were alerted to the incident at around 11.40am, where they found the child lying motionless with multiple wounds in her home. She was unconscious when taken to hospital and was pronounced dead at 12.45pm.

The girl's 35-year-old biological mother was arrested at the scene.

According to Shin Min, six family members of varying ages had arrived at the mortuary on Thursday to collect the body. An elderly woman believed to be the girl's grandmother was seen sobbing while leaning her head against a wall as other family members consoled her.

A middle-aged man in the group was also seen wiping away his tears. Soon after, two other women fell to the floor in distress, with one of them letting out an anguished cry. Others in the family, including the elderly woman, rushed over to support her, reported the Chinese evening daily.

When approached by reporters outside the mortuary, a woman identified as the wife of the suspect's brother said that no wake will be held and the child would be cremated on the same day.

Read Also
Geylang murder case: 8-year-old victim was nice, would greet him when they met in lift, says neighbour 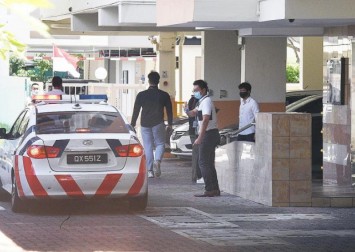 The suspect has another three-year-old daughter who is currently being looked after by her grandparents.

Lianhe Wanbao earlier reported that neighbours in the estate were unaware of the incident until police officers arrived at the scene. According to the Chinese evening daily, the woman lives in the apartment with her daughters, her parents, older brother, his wife and their son.

Wanbao spoke to the woman's 19-year-old niece, who said that her three-year-old cousin had witnessed the entire incident. She added that she was worried that the child would need to seek psychological help.

The suspect was charged in court on Thursday, Shin Min reported. Under the penal code, those found guilty of murder face the death penalty.