'Once you've spoken, it's on the record': PM Lee shares how nothing is secret in politics today

Having participated in a total of nine general elections since the 80s, Prime Minister Lee Hsien Loong has personally witnessed many of Singapore's changes over the decades.

In a Facebook Live session for Ang Mo Kio GRC on Monday (July 6) night, he was asked how campaigning today is different from the past.

"In 1984, when I first came in, there was no internet," he said. "It was something that existed in the world but it wasn't something everyone had access to."

"You meet people, you talk to them and then word would spread through the coffeeshop and slowly it would get out."

It was a kind of politics that was very personal, PM Lee noted.

While face-to-face communication is still present, he said, everything moves at a much faster pace nowadays with advancements in technology.

"Now you meet the chap at the coffee shop, he'd take [out his phone] and ask you: 'I see this. What does this mean?'

"And you have to respond [on the spot] like that," he said.

This means that a politician's words and actions are placed under even greater scrutiny in the digital age.

When his People's Action Party (PAP) teammate Darryl David shared how he realised during his first livestream that he couldn't stop because people were watching, PM Lee piped in: "Yes, people are watching, and somebody will [take a] video of it.

"Once you've spoken, it's on the record forever."

Read Also
GE2020: ‘WP should not ask voters to write it a blank cheque’, says PAP in statement about Raeesah Khan incident 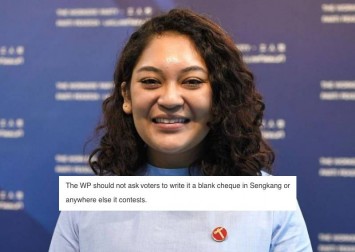 Earlier in the day, the PAP released a statement on an incident involving Raeesah Khan from the Workers' Party and questioned why she's still being "worthy of consideration as an MP".

She is currently under police probe for an offence of promoting enmity between different groups on grounds of religion or race.

On July 5, she apologised for past Facebook posts in which she had made improper remarks and said she will cooperate with police investigations.

"My intention was never to cause any social division but to raise awareness of minority concerns. I apologise to any racial group or community that have been hurt by my comments," she told the media at an impromptu doorstop session that night.

Party chief Pritam Singh stood by the candidate for Sengkang GRC, saying that she will continue contesting in the general election and added WP will review the incident after the election is over.