One year on, frontliner family still getting soapy water splashed outside door, sprayed with disinfectant by neighbours

Nobody likes having to deal with unfriendly neighbours but what happens when that unfriendliness turns into unruly behaviour?

Imagine opening your door to see your neighbour splashing pails of soapy water outside your flat, or spraying disinfectant at you and your children when entering or leaving your home.

For about a year or so, that has been the reality of a family consisting of a nurse and his wife who works in the essential service line and their two young children.

Just yesterday morning (May 18), their neighbour harassed them again as the nurse's wife was preparing to head off to work.

In CCTV footage posted on Instagram account SGNightingales, she was seen putting on her shoes when their next-door neighbour poured a red pail full of soapy water onto the ground before her.

When the woman looked at him, he asked her, "What are you looking at?" in expletive-laden Hokkien as he slammed his gate shut.

After the clip was circulated on Instagram, it got many comments from netizens expressing sympathy for what the family has to go through.

But this is only the latest in a string of harassment incidents, the nurse's sibling said in the Instagram caption.

Harassment for a year

On March 3, the nurse was about to take his son to school when the neighbour splashed soapy water outside their door.

In an Instagram post, he said that the neighbours claimed that they were simply spraying their gate whenever he raised the issue to them.

"My son would cough due to the strong smell of the disinfecting solution and when he cough, the school centre will reject him."

The nurse questioned what his next move should be. Given his son’s young age, if he was given a Stay-Home Notice, the nurse or his wife would have to take leave from work to care for their child. 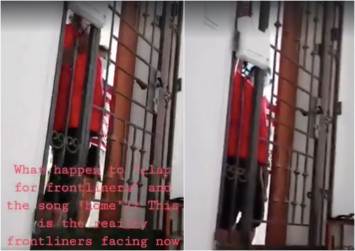 Since May last year, the family has been enduring such behaviour from their neighbours, local media reported.

The nurse made a police report after his neighbours sprayed him with disinfectant while chanting "Virus, virus!"

In a separate Instagram post in the same month, his wife shared her helplessness when their five-year-old asked: "Ibu (mother), how come aunty throw her saliva? Why she spray (Dettol) at us? I scared Ibu. Hold my hand Ibu."

After getting sprayed by disinfectant, their daughter was afraid of going out or playing in the common corridor, she said.

As Singapore saw its first hospital Covid-19 cluster and a rise in community infections, healthcare workers from Tan Tock Seng Hospital (TTSH) said they're facing discrimination from some members of the public.

Staff shared that taxis refused to ferry them, landlords and hotels turned them away over coronavirus fears.

On May 7, Prime Minister Lee Hsien Loong urged the public to show support to the healthcare workers.

"We cannot let setbacks divide us or wear us down, because if we lose our unity, the virus has won," he said.

Similarly, the Ministry of Health's director of medical services Professor Kenneth Mak said on May 4 that TTSH healthcare workers should not be shunned.

"This is a concern for us because these workers are well and they have committed a lot of time and energy towards looking after patients in TTSH," he said.

ALSO READ: 'They're not at fault': Netizens defend healthcare workers after some blame them for Covid-19 cluster at TTSH