Despite the thunderous applause, choral homage and intricate light displays meant to pay tribute to our healthcare workers, it seems that not all are treated with such dignity.

A nurse who had previously endured stares and insults from his neighbours finally made a police report after they began spraying him with disinfectant last Wednesday (May 13) and chanting: "Virus! Virus!", 8world reported.

Speaking with the Chinese news portal, the unidentified man revealed that he has been a nurse for 10 years and was previously based in Sengkang General Hospital (SKH) before he was transferred to a neighbourhood clinic recently. His neighbours, too, had always known of his occupation.

Both families had always been amicable with each other, according to Lianhe Zaobao. That changed after three of his wife's colleagues moved in with them.

It was then that the stares and insults began. 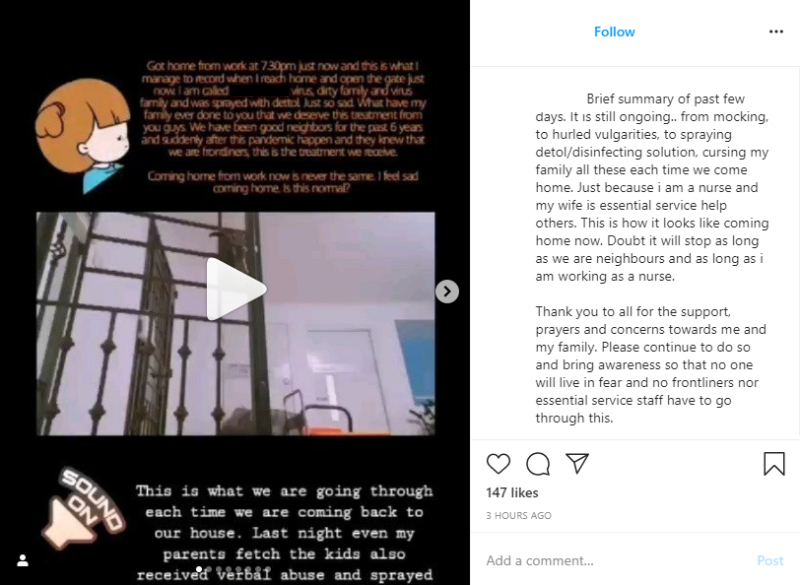 Like him, his family has not been spared from such treatment. His wife, who works in an essential service line, their five-year-old daughter and his wife's colleagues face the same ordeal daily.

In a separate Instagram post, his wife added that their daughter was now afraid of going out or even playing along the corridor, in fear that their neighbours would spray disinfectant at her, or even spit at her.

She recounted her daughter saying: "Ibu (mother), how come aunty throw her saliva? Why she spray (Dettol) at us? I scared Ibu. Hold my hand Ibu."

One of the videos the couple posted showed their daughter holding her arms up in defence as she approached their own front door.

"A humble abode I once call home is no longer home to me," she wrote. "I am scared to go home after work cause I know by the time I reached my corridor, bad words will just start coming out from our neighbour's mouth [sic]."

The couple lodged a police report for harassment after their daughter was sprayed in the face. However, they were told to lodge a magistrate report instead as the police were unable to assist without a court order, the nurse said.

He separately told 8world that he has reached out to Janil Puthucheary, Member of Parliament for Pasir Ris-Punggol group representation constituency, as well as the head nurse and an administrator from the hospital for assistance.

Read Also
'You nurses always walk around with virus on you': Nurses shunned, ostracised for wearing uniform 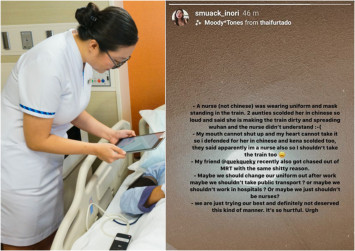 SKH released a statement on Facebook saying they were aware of the incident. They stressed that their staff deserve consideration, respect and a safe environment both at work and at home so that they can continue giving their best and thus asked the public to respect their personnel.

"We would also like to take this opportunity to remind members of the public that cases of physical or verbal abuse of our healthcare staff will be reported to the police for follow up," SKH added.

We are aware of a video circulating online posted by one of our nurses on the behaviour of his neighbour. Our staff has...

Posted by Sengkang General Hospital on Sunday, May 17, 2020

This isn't the first case of discrimination faced by healthcare workers. Earlier in February, several professionals had shared their own accounts of harassment and discrimination, from having a private-hire car cancel on them simply for heading to the hospital, to being told, "You nurses always walk around with virus on you and always spread to people."