Organiser of group badminton session that drew flak after Covid-19 case: Guidelines can be clearer

The Covid-19 patient who had played badminton at the ActiveSG Jurong East Indoor Sport Hall on Monday (June 22) with a large group had joined the session for the first time this year, signing up through social platform Meetup.

The platform allows users to create groups and host events that others can join. Besides sports, the activities include a wide range of interests such pets, films and music.

The organiser of the June 22 session insisted that the group, which comprised 29 people including himself, had no intention of breaching the safe management rules put in place by Sport Singapore (SportSG) to prevent the spread of Covid-19.

Responding to queries from The Straits Times on Saturday (June 27), the man, who declined to be named, said that those who had played with the patient have been quarantined, estimating that this amounted to "more than half" the group. The rest of them, including himself, are under phone surveillance.

The group has been criticised by SportSG, which runs all ActiveSG sports facilities, for flouting its safe management measures at the hall.

These measures include a cap of four players per court and a rule that players must stay within the court assigned to them. They are not allowed to switch courts, which have physical partitions.

These rules that prohibit inter-group mixing are in force for all sports and not just badminton. They were introduced on June 19, the day sports facilities were given the nod to reopen following the easing of circuit breaker measures.

But the organiser felt that the rules could be "interpreted differently", and called for a clearer phrasing of the guidelines.

"I want to do my part as a member of the public to participate in sporting activities safely and according to the rules.

"However, rules given are not clear to myself and I believe to some others as well," he added, noting that the players on that day had practised safe distancing by placing their belongings away from one another and by avoiding all body contact.

"Based on my interpretation of the rules as stated in the official guidelines, I thought that I had properly followed the rules."

Read Also
Coronavirus: Rise in community cases not stopping people from going to the beach 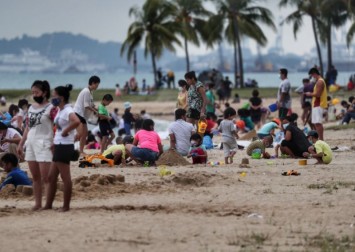 He added that he had taken greater precautions by booking more courts than usual - six - for the three-hour session on Monday.

"We used to only book four courts for the very same number we had on 22nd June.

"In light of the new safety measures, I reduced the number of players that could play and booked more courts to accommodate lesser players as I understood clearly that there can be no more than five in a group for a court and a maximum of four players in a court while the other will have to wait outside the court for his/her turn.

"I have thus allowed only 29 players to play in six courts (which 30 was what I thought as the maximum)."

He also said that he had tried to comply with the rules, saying that when an ActiveSG staff member had observed the group and informed the players to warm up and rest outside of the hall unless they were playing on the court, he "heard them and quickly took action".

He also queried "why none of them alerted myself or my players even though the staff were present for a good 10-15 minutes to observe the inter-mingling".

The incident prompted the closure of all ActiveSG sport halls on Sunday, with SportSG saying the "time-out" would allow users to "take this time to reflect on the importance of exercising individual responsibility for the collective good" and ensure they "understand the rules and spirit of the safe management measures".

ALSO READ: All ActiveSG indoor sport halls to be closed on June 28 for 'time-out' after Covid-19 patient played badminton in large group

The ActiveSG Jurong East Indoor Sport Hall was closed on Saturday for cleaning and disinfection as well.

SportSG also said it would implement new measures to ensure users abide by the rules such as issuing coloured wristbands to be worn by players to identify different groups for each badminton court, and to remind players to act responsibly.

It will also be scrutinising badminton social groups that plan to congregate in a large group at any venue.

Individuals involved with such groups, as well as those who play and mix across different courts, will have their bookings cancelled and/or be ejected from the indoor sport hall, as well as barred from the future use of ActiveSG facilities.