Customers of Collin's Grille were left high and dry on Christmas Eve when their pre-ordered Christmas dinners failed to materialise.

In photos posted on social media, long queues were seen at Collin's Grille outlets across Singapore on Dec 24.

The Christmas sets were priced from $128, with a la carte options available. Days earlier, Collin's had thanked customers for their "overwhelming support" and posted a giveaway on their Facebook page.

However, the post has since drawn mostly negative reviews from customers of their ruined holiday celebrations.

Crowd situation at Collin's NEX (Serangoom) Thanks to a friend of our page for sharing.

Angry customers described how they had queued at the respective outlets to collect their orders, with some waiting for up to three hours to no avail.

Others eventually gave up on the long wait and left empty-handed, ordering last-minute takeaway meals from restaurants elsewhere instead. 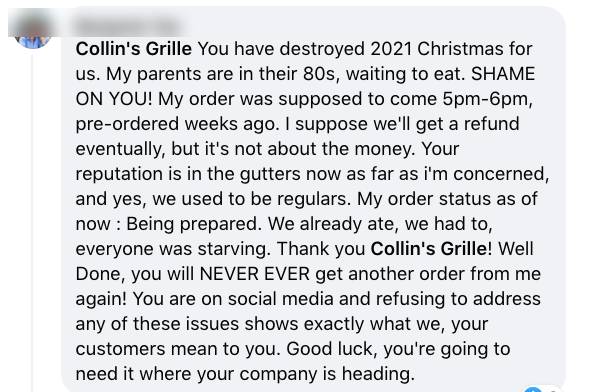 One wrote that he had waited three hours for the meal but ended up with McDonald's for a "Christmas Eve supper", while another received the SMS for collection at 11.30pm.

Many noted that there was little to no explanation from staff for the delay.

A customer stated how she'd received a call that delivery may be delayed despite her pre-order. She was advised to pick up the meals from the outlet instead and did so only to find a long queue for the food.

The same predicament awaited those who ordered their food through delivery. Those who managed to get their Christmas meal had to endure a wait for up to two hours for their food to arrive while for others, the food was a no-show.

According to another account, poor queue management also meant that people were not assigned their food according to their collection timing. Hence, some who arrived later managed to collect their food even when there were others who waited for three hours to no avail.

Heated words were also exchanged between restaurant staff and customers at one outlet, according to a commenter.

While many of the customers demanded a full refund and compensation, one disgruntled customer stated that he has made a report against the restaurant with the Consumer Association of Singapore.

Collin's Grille has since come out to apologise for the fracas, stating in a social media post on Christmas Day that they would be providing a full refund as well as a voucher equivalent to the order placed for cancelled orders.

Admitting that they owe customers an explanation, Collin's explained that the third-party logistics provider they relied on had "driver issues at the last minute".

It also stated that there was a power outage at their central kitchen which caused the backlog of orders.

"No amount of our apologies and explanations will be adequate for disappointing you. Still, we humbly offer our sincerest apologies," wrote Collin's.

It added that customers who cancelled their orders will have to email Collin's with their contact details for their refund and voucher.

However, some customers felt Collin's could have done more to salvage the situation, such as contacting the customers earlier to inform them of the power outage.

Others commented that compensation should be also be given to those who endured the long wait for their food as well and not only those who gave up on the wait.

They noted that there are also those who could not cancel their orders because they couldn't get through to the restaurant.

Wrote one customer: "I could not even cancel the order if I wanted because there is no way to contact you at 6.30pm besides the unreachable phone number."