The law ministry said this is the seventh occasion in which correction directions under Pofma have been issued against a Facebook page operated by Mr Alex Tan.

SINGAPORE - The National Times Singapore Facebook page has been asked to put up corrections to a post in which multiple false and misleading statements were made about the scope and application of the Protection from Online Falsehoods and Manipulation Act (Pofma).

The Ministry of Law said in a separate statement on Wednesday this was the seventh occasion in which correction directions under Pofma have been issued against a Facebook page run by Mr Tan, "who has repeatedly and deliberately conveyed falsehoods affecting the public interest".

The Pofma directives would require the Facebook page to publish a correction notice. Facebook would also be required to communicate the correction notice to all users in Singapore who access the falsehood through its platform.

On May 15, the National Times Singapore Facebook page published a post claiming, among other things, that "every criticism has been outlawed by the Singapore government through its new Pofma legislation, where the politicians in power get to decide what is truth".

However, this is false, said the Government on its fact-checking website, Factually.

Pofma applies only to factual statements that are false and does not apply to opinions, it added, noting that disputes on whether a statement is false can be determined by the Courts.

"It is therefore also untrue to say that Pofma outlaws every criticism of the Government. Before and after Pofma came into force, the Government has been regularly criticised on various matters. These criticisms have not been subject to Pofma." 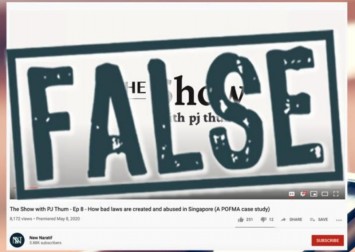 The Facebook post also stated that Mr Shanmugam had issued a Pofma direction to ban an online video in which historian Thum Ping Tjin asserted that Singapore's fake news law renders all criticism of the Government illegal.

The Government said the minister has not issued a Pofma direction to ban the video, which was subjected to an earlier Pofma direction, and that it remains accessible to the public.

In the same Facebook post, Mr Tan, who lives in Australia, alleged that Singapore's judiciary is biased.

These are untrue, said the Government, adding that Mr Tan has previously been issued Pofma correction directions in relation to falsehoods conveyed on six separate occasions on his previous Facebook pages, the States Times Review and Singapore States Times.

Most of the earlier falsehoods related to the Covid-19 situation, including claims that Singapore had run out of face masks.

Mr Tan was bound to comply with these correction directions, but has refused to comply, it added.