The fake news law was also invoked to issue a correction direction to TOC and other sites that repeated the claims.

SINGAPORE - The police have released two clips of body-worn camera footage from an incident in Yishun involving officers who had engaged an elderly woman who was not wearing a mask in public.

The footage shows a police officer buying the woman a packet of food from a nearby stall and not taunting or reprimanding her, the Singapore Police Force said in a statement on Tuesday evening (May 25).

Instead, the officer was telling the woman's domestic helper to remind her to wear a mask when she is out, the police said.

This comes after The Online Citizen Asia (TOC) had posted a video on its Facebook page just after midnight on Tuesday, featuring an interview with the woman in which she denied that police officers had bought her food.

The video also claimed that audio from the incident, which took place on the evening of May 17 and was uploaded online by Instagram user @nichology, showed the police officer had reprimanded the woman for not wearing a mask.

The police had previously issued a clarification on the incident on May 19.

The fake news law was also invoked to issue a correction direction to TOC and other sites that repeated the claims.

Speaking to the media at the police headquarters at New Phoenix Park on Tuesday, Law and Home Affairs Minister K. Shanmugam said TOC's latest video was a cynical and malicious attack on the police that took advantage of a woman with dementia.

He said: "People who have dealt with people with dementia will know that you can sometimes get them to say many things they will not remember... You interview her, this old lady, try and get her to say things, I would say this is despicable." 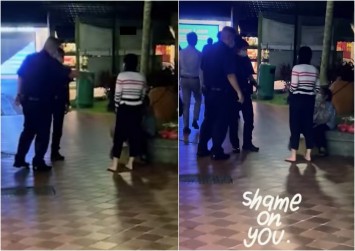 In its statement, the police said it had spoken to the daughter of the elderly woman, who confirmed her mother has dementia and may not remember the incident clearly.

The police added that while the woman's daughter did not want to be interviewed by the media, she had expressed disappointment that TOC interviewed her mother and posted the video online without attempting to understand her condition.

The police added it had decided to release relevant portions of the body-worn camera footage after discussions with the woman's daughter, although this was not its usual practice.

A spokesman said: "Police generally do not release such body-worn camera footage as the information is confidential."