'I used to avoid going home': Ryan Tan claims this is why he used to drive NOC girls back after work

Who knew there was more tea to spill?

In a recent interview with deejay Sonia Chew on the podcast Men, Explain, Tan addressed, seemingly for the first time, Chan's allegations that he "had something to do with NOC girls".

More specifically, how Tan always used to drive some of the female talents home.

Chan had shared with Xiaxue during an interview last year where she alluded to his cheating behaviour, alleging that Tan "has a very specific pattern" where "he'll start to say he wants to send people home".

When Chan asked him to come clean with her before they parted ways, Tan admitted that he had "a crush on a few girls", she said.

This topic came up during Tan's conversation with Chew, where he discussed his relationship with his current partner, Cherylene, and how the latter provides him with a peaceful "sanctuary" to go home to.

The 34-year-old entrepreneur shared that during his marriage, it had become "stressful" to be at home due to the dynamic between himself and Chan.

"I used to avoid going home," Tan revealed, adding that "it's time to address one of the rumours".

"I think my ex-wife mentioned that I always drive girls back, but the thing is, I drive everybody back, I drive a lot of my staff back, guys or girls," Tan explained.

Tan continued to say that the car ride provided an opportunity to soothe and comfort staff members who had been scolded by Chan at work.

"Sometimes when they kena scolded at work [or] they cry at work, I fetch them back to make them feel better, comfort them," Tan shared.

He added: "I do that to chat with them and also to, some sort of, escape from home. Because I don't want to go home and fight another war."

Acknowledging that he could still be "villainised" for what he'd just shared, Tan stated: "At this point I don't care already…. believe what you want, if you want to stay committed to misunderstand, then just stay committed."

During the show, which dived into how both Tan and Chew navigate their own large age gap relationships, Tan also revealed more about his relationship with Cherylene, who is 11 years his junior.

And as they say, age is just a number.

Tan described how he was impressed by Cherylene's maturity and financial planning prowess.

Learning from his past experience, Tan also shared that he avoids working with Cherylene "in any way".

As for who wears the pants in the relationship? 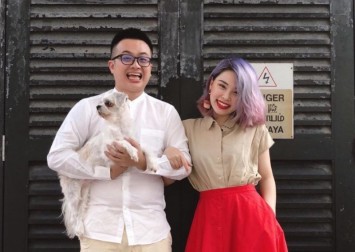 "To be honest, in my previous marriage, I was the beta, she was the alpha. In this relationship, we are both the beta," said Tan, adding, "I like this all-beta dynamic".

"So you're beta together," quipped Chew.

Tan also revealed that due to their age gap, Cherylene would get comments about how Tan is her "sugar daddy".

"Little did they know that I'm even more broke than her," he laughed.

He added that as he is "not doing so well financially", Cherylene would bear half the cost during their dates, "or she even treats me sometimes, of her own accord."

But don't hold your breath for any wedding bells just yet.

Sharing that he "[doesn't] like to put a time on it", "the latest" that Tan thinks it'll happen is in another six years.

He added, however, that the date could come sooner "if I can sort out my things earlier", possibly alluding to his financial situation.