Kenneth Chong Chee Boon (left) and Nazhan Mohamed Nazi are each contesting one charge of intentionally aiding a group of SCDF servicemen to cause grievous hurt to full-time national serviceman Kok Yuen Chin.

SINGAPORE - The trial of two Singapore Civil Defence Force (SCDF) officers allegedly involved in a 2018 ragging incident, in which national serviceman drowned in a pump well, closed on Friday (June 12), with the court set to deliver its verdict on July 10.

Kenneth Chong Chee Boon, 37, and Nazhan Mohamed Nazi, 40, are each contesting one charge of intentionally aiding a group of SCDF servicemen to cause grievous hurt to full-time national serviceman (NSF) Kok Yuen Chin, 22, via a rash act endangering human life on the night of May 13, 2018.

They are accused of doing so by failing to prevent the group from pressuring Corporal Kok to enter the 12m-deep pump well at Tuas View Fire Station that night — an activity known as kolam — to mark the impending completion of his national service.

Chong was commander and Nazhan, deputy commander, of the station then.

Cpl Kok eventually drowned after he was pushed into the well by another serviceman, Muhammad Nur Fatwa Mahmood.

Three regulars, including Nur Fatwa, have already been convicted and sentenced for their involvement in the death.

Deputy Public Prosecutors Kumaresan Gohulabalan, Kelly Ho and Sheryl Yeo said in their written closing submissions that Chong and Nazhan were legally obliged to keep Cpl Kok safe while the NSF was on duty that night.

The DPPs argued that both men had breached their legal obligation by omitting to interfere even as they knew that the group of SCDF servicemen were pressuring Cpl Kok to participate in the kolam ritual. 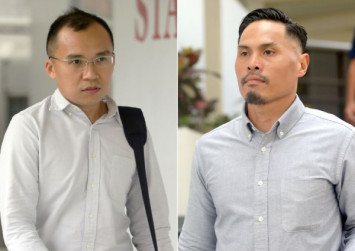 Instead, Chong turned back to his duties in the station's watch room while Nazhan left the pump well area - where the rest of the servicemen and Cpl Kok were — to return to the station's office, they said.

"These were calculated acts — by turning away from the scene, they signalled to the servicemen their intention for the rash act to be committed, or at the very least, their indifference to whether the rash act would be committed," the DPPs added.

In their separate written submissions, defence lawyers for Chong and Nazhan argued that the prosecution had not proven its case "beyond reasonable doubt".

Mr Wee Pan Lee and Ms Low Chang Yong — who represent Chong — said their client trusted the servicemen to protect each other.

Chong also believed Cpl Kok would have entered the pump well only voluntarily and on his own, which would have a "very low" risk of harm, they said.

It was therefore not a "foreseeable or probable consequence" to Chong that Nur Fatwa would have pushed the NSF into the well, the lawyers added.

Nazhan's defence lawyers, Mr Singa Retnam and Ms Josephine Lezu Costan, said their client had left the pump well area before Cpl Kok was pushed and could not have "intentionally aided the commission of the rash act".

If convicted, Chong and Nazhan can each be jailed for up to four years, or fined up to $10,000, or both.