She helped to prepare Aloysius Pang's body for his final "red carpet".

Singapore funeral director Angjolie Mei paid a moving tribute to the late actor in a Facebook post at around midnight, Saturday (Jan 26).

Angjolie's team was tasked to prepare the 28-year-old's body for the wake, which began at noon today. She shared that her "heart broke", "when the lid of the coffin opened".

The 37-year-old director of funeral services company The Life Celebrant wrote that she'd never met the actor, but wished they'd been able to meet under a different circumstance. 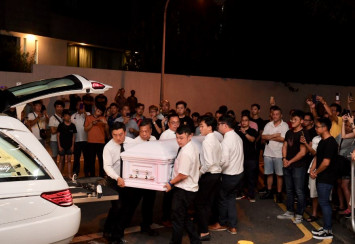 Noting that he loved the colour black, she wrote:

"We changed you into your favourite black outfit. Your stubbles, we delicately trimmed. Your signature eyebrows, we carefully brushed. Your beautiful face, we gently touched up. Your hairstyle, your stylist gingerly styled to perfection. Now, you are ready to walk down the red carpet."

"I wish I could have met you on a different occasion and compete the number of black outfits we have."

"With a very heavy heart, I bid your farewell as it was time to send you home to an anticipatory crowd. Till we meet again."

Angjolie's post has since been shared more than 1,100 times as of Saturday night, attracting more than 80 comments -- not all of them positive.

Detractors accused her of self-promotion and questioned if she had sought permission from Aloysius' family before releasing "sensitive" details of the embalming process to the public.

Others, however, thanked her for doing her job, believing that she had no hidden agenda in posting her remarks.

Aloysius died on Wednesday (Jan 23) after suffering serious chest and abdominal injuries from an accident during a Singapore Armed Forces military exercise in New Zealand.

Hundreds turned up at the venue of the wake on Friday night (Jan 25) even before the public memorial was due to start.

Members of the public can pay their respects at 82A MacPherson Lane from today until noon on Sunday.