Singapore GE2020: SDP leaders defend 10m figure that had been 'floating around'

Singapore Democratic Party chief Chee Soon Juan, who is standing in the single-member constituency of Bukit Batok, posing for a photo with a member of the public at Bukit Batok MRT station yesterday.

Singapore Democratic Party (SDP) chairman Paul Tambyah stood by his party's decision to press the People's Action Party (PAP) on the question of a 10 million population target, saying the ruling party has now been forced to clarify and assure Singaporeans that there are no such plans.

He said the PAP could have clarified matters earlier but did not do so, adding: "They have kept quiet all through. They have fed this ambiguity. Now finally, for the first time, they have said no."

Speaking to reporters yesterday during a walkabout in the Bukit Panjang single-member constituency that he is contesting, Professor Tambyah said: "We got the PAP to give us a straight answer. Normally, when you have a little kid, you ask them 'yes or no' and the kid doesn't give you an answer. Finally, the kid has given us an answer and they said 'no', which is good."

He said it also "baffles" him that the PAP called the 10 million target a "falsehood" perpetuated by the SDP. The SDP cited the figure from a press report, he said.

A statement issued later by the SDP yesterday reiterated Prof Tambyah's point. "Did Mr Heng refute and correct the report at the time it was published? If not, he can hardly accuse the SDP of making a false claim now," it said.

The party statement added that Housing Board chief executive Cheong Koon Hean had also said Singapore's population density would increase between now and 2030.

This, the SDP claimed, has caused "disquiet among the public, that Singapore may, indeed, be moving towards a 10 million population".

Separately, SDP secretary-general Chee Soon Juan, during a walkabout near Bukit Batok MRT station yesterday, said: "All these figures have been floating around. We didn't invent it. It didn't originate from us. And if we know it and it's public, the people here know it too."

One of the SDP's key planks of this election is a call to voters to say "no" to what it says is the PAP's plan to increase Singapore's population to 10 million.

The party maintains that the 10 million figure was from a Straits Times report on remarks by Deputy Prime Minister Heng Swee Keat at a dialogue with Nanyang Technological University students in March last year.

"Figures not from us. All these figures have been floating around. We didn't invent it. It didn't originate from us. And if we know it and it's public, the people here know it too," said Singapore Democratic Party Secretary-General Chee Soon Juan.

The March 29, 2019 article on the dialogue, which included a question on population density, reported that Mr Heng said Singapore's population density is not excessive, and noted that other cities are a lot more crowded in terms of liveable space.

Read Also
SDP: We made PAP declare it does not have 10m population target 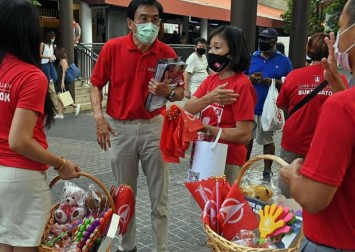 The article also said Mr Heng cited former chief planner Liu Thai Ker, who said in 2014 that Singapore should plan for 10 million people for it to remain sustainable in the long term.

Mr Heng had cited Mr Liu in his response to a question on the Government's 2013 Population White Paper. However, he had stressed that the number goes beyond how densely populated Singapore would be. The social space is as important, he said, adding that openness and understanding is important.

But Mr Heng did not say Singapore should plan for 10 million people - nor did he mention the figure.

Dr Chee cited the report in a televised debate on Wednesday night, claiming that Mr Heng had toyed with the idea of raising the population to 10 million - a charge refuted several times by Foreign Minister Vivian Balakrishnan of the PAP, who also took part in the debate.

Dr Balakrishnan told Dr Chee that the 10 million figure was a "strawman" and a "falsehood", adding: "Let me state for the record: We will never have 10 million. We won't even have 6.9 million. The Government doesn't have a target for the population.

"What we want is a Singapore core that is demographically stable, able to reproduce ourselves, able to create opportunities and jobs for ourselves and able to stay as a cohesive whole. It is not a target, and it's certainly not 10 million."

At his walkabout yesterday, Prof Tambyah said the PAP's clarification was a "victory for the people of Singapore".

"They have clarified, they said that they are not going to go for 10 million. They said they may not even go for 6.9 million, which is good for Singapore. And it's actually the goal - the one 'N' in the '4Y1N' (campaign)," he said.

The "4 Yeses and 1 No" campaign is the SDP's main election message.

Prof Tambyah said the SDP believes Singapore should have a smaller population, and that this position "does not discriminate against foreign workers" and applies to everybody.

He said: "SDP has argued a minimum wage must apply to both locals as well as foreign workers. And that way, we get qualified people, you know, talented people who have the right skills and abilities. And you don't just bring in somebody because you want to exploit them and make them work for a lower salary than others."

Prof Tambyah added during his walkabout that the SDP did not want to be drawn further into this issue, describing it as "a distraction" in the midst of an election held during a pandemic.

"Singaporeans do not need to be distracted; we need to focus on jobs and livelihoods," he said.