Singaporean hits Batam beach on birthday getaway, gets a swole 'present' from sandflies

A young woman wanted to enjoy her birthday in Batam with some friends, but she ended up in the hospital instead.

In a TikTok video on Dec 3, Natalie said she felt her face "ballooning" after frolicking on the beach. She also broke out into hives and "couldn't really breathe properly".

"Sandflies bit me, all over my face, my neck, everywhere," Natalie shared in the clip.

Thankfully, the staff at the resort she was staying at, Harris Resort Barelang, came to her rescue.

"The resort staff were so nice because they sent us all the way to the hospital and waited throughout the whole thing just so that they could send us back," she recounted.

Unfortunately, a language barrier between Natalie and hospital staff left her feeling slightly "sceptical" as "they had no idea" what she was saying and appeared to be "uncertain of what to do".

They eventually gave her a steroid jab as treatment, she said.

According to an article by SingHealth, sandfly bites can transmit serious viral and protozoal diseases in certain parts of the world, but they are "usually just a minor annoyance" in our part of the world.

Symptoms include itching, rashes and swelling, and more severe cases may see rashes spread over across a larger area of the body.

Treatment usually involves the use of long-acting antihistamines and potent topical steroids, as well as antibiotics if there are signs of skin infection. 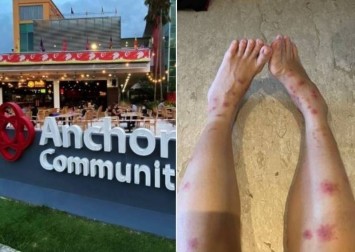 However, prevention is better than cure.

SingHealth recommends that people cover up when they're out on the beach or apply insect repellents containing diethyltoluamide or DEET.

While many may think sandflies are only found in places with sand such as beaches, the blood-sucking insects have also made unwanted appearances in other places.

In July, a diner at Essen@The Anchorvale was sitting in the al fresco area of the food court when she was bitten by sandflies.

In total, she sustained 40 bites.

Essen apologised for the incident and shared that apart from spraying insecticide twice weekly, they have a UV-light insect catcher outdoors to deal with the pests.

They suggested that diners sit indoors to avoid getting bitten. However, the woman explained that she had "no choice" as the food court was "fully packed" at the time.