This made my day: Family sets up Ramadan gifting store outside Tampines HDB home for those in need

During the holy month of Ramadan, it is common to see institutions such as mosques, charities, or non-governmental organisations carry out initiatives for the less fortunate.

Asanul Fariq Sani and his family decided to be part of that wave of positivity, by setting up a Ramadan gifting store.

What piques people's interest is the chosen location of this store.

Since the start of Ramadan on April 13, Fariq began Infaq Corner (Kindness Corner) right outside the doorstep of his home at 268 Tampines St 21.

Infaq is an Arabic term which broadly speaks of wealth redistribution and doing good without expecting anything in return.

Fariq and his family would neatly package and set a variety of items on tables outside his home. These items are left there and is completely free for anyone to take, 24 hours a day, and anytime during the week.

"So far, we've given out roughly 50 to 70 bags of rice. Second, it's Milo, coffee, Lipton tea. [Also, demand for] prayer garments, tudung and baju kurung is quite high. 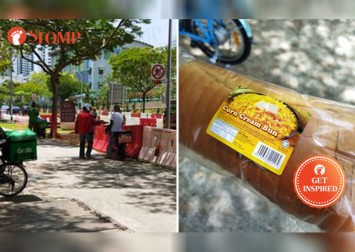 Every time we set a new batch outside, they'll be taken within a day," Fariq said in an interview with BERITAMediacorp.

Their efforts are communicated solely through social media and the positive response has meant that replenishing stock could happen up to five times a day.

Also, the overwhelming response from the public has been beyond what the family predicted.

"Seeing people come from [as far as] Redhill, Choa Chu Kang, Jurong, it's eye opening," said Fariq's wife Norhasyimah Awaludin, " and to realise that not everyone has it easy."

Fariq and Norhasyimah, both primary school canteen vendors, spent $3,000 from their personal savings to start this initiative.

The couple intends to continue expanding their offerings by including cooked meals in the days to come.

#kindness #ramadan #Charity #This made my day