A group of monkeys walking on the roof of shops at Punggol Settlement.

First, there were otters, then came the wild boars and now, monkeys.

Imagine having a nice dinner with your family and from the corner of your eye, you see a monkey staring right at you, waiting for the opportunity to grab your meal and run.

That's what has been happening at Punggol Settlement, where several dining establishments are located.

A group of around 30 wild macaques are regular patrons of the restaurants and shops there, reported Shin Min Daily News. Their antics have disturbed customers and disrupted businesses, causing them to incur losses due to these unwelcomed guests.

Francis Ng, CEO of House of Seafood, told Shin Min Daily News that the wild animals have destroyed cutlery, ornaments and menus that are usually placed outside the restaurant.

One employee also said that she has seen these monkeys snatch away diners' drinks, even breaking the glasses at times.

"The diners were terrified at the time," she recounted. "Before leaving, they said that they would not sit outside next time."

The restaurant has now, on standby, a broom to chase these pests away and stop them from harassing their customers.

Some restaurant staff however, shared with AsiaOne that they are no longer fearful of the monkeys as they have grown accustomed to the frequency of their visits.

But this was not the case for Reviline, a staff member at Tandoor Lounge, whom AsiaOne interviewed on Thursday (Aug 4).

In fact, she had encountered the wild monkeys at her workplace again just today.

"I was too scared to go outside," she told AsiaOne, "they can get aggressive."

According to Reviline, the macaques were playing with some tissue packets outside the store.

Thankfully, there were no customers at that time and the monkeys left without causing any harm.

She recounted one time, about two months ago, when the animals paid a visit again and took the food of her customers.

She could only stand in shock while the customers tried to push the monkeys away.

And it's not just the F&B outlets that are being targeted.

The staff of a convenience store there told Shin Min that the monkeys would drop by once every 10 days, and would usually make off with some loaves of bread and bags of chips displayed outside. 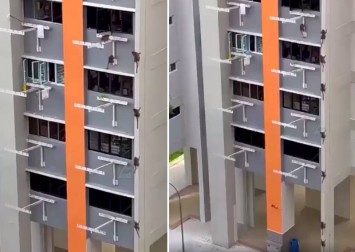 The monkeys would sometimes also rip through product packaging and they would have to be thrown away, causing the business to sustain losses of between $20 and $30 each time.

"We can only shout at them and chase them away," said this staff.

A bicycle shop operator surnamed Cai told the Chinese evening daily that whenever the monkeys appear, they would not only damage his goods but also leave behind their faeces.

And there is only so much he can do.

Cai has tried hitting the walls of his shop with a cane to scare the animals off, but to no avail.

He has already chopped down some nearby tree branches and said he has lodged a complaint with the landlord.

"I'm tired and I don't know who to call for help. It's very frustrating," said Cai.

The same group of trouble-making macaques might have been spotted last month.

In July 2022, several residents of Punggol East were worried about being attacked by a gang of monkeys suspected to have come from nearby Coney Island.

NParks has advised members of the public to avoid establishing eye contact with macaques or showing signs of aggression when coming face-to-face with them. It is also best to refrain from feeding them or using flash photography.

On Monday (Aug 1), National Development Minister Desmond Lee said that the Government received about 2,500 cases of monkey-related feedback each year from 2017 to 2022 and that NParks are taking measures to reduce the number of reports on monkey-related incidents.

ALSO READ: No photos please: Macaques at NTU lunge at woman trying to get close