Teachers and pupils hurriedly closed the doors and windows to their classrooms after a monkey was spotted clambering up the four-storey school building and onto the roof.

The incident is said to have occurred at Chongfu School in Yishun on Thursday (Feb 17) morning, Shin Min Daily News reported on Feb 19.

The Chinese evening daily had received a notification from a concerned parent, who told the paper of the simian intrusion.

The parent, a 46-year-old engineer, said the school had warned pupils on Feb 16 about monkey sightings and that it had dispatched personnel to keep a lookout at locations where the primates tend to appear. According to his son, the school had told pupils to avoid those areas.

The man added that among parents, there was speculation if the sightings involved just one monkey or a group of them, and that he had not heard from the school regarding the incident.

Another parent whom Shin Min Daily News spoke to said that his nine-year-old son had witnessed the monkey intrusion on Thursday.

When interviewed, the boy said he saw a monkey climbing up onto the roof of the school and that his friend who also saw the monkey screamed in shock.

The boy added, the principal informed teachers through the internal broadcast system to close all doors and windows to the classrooms. However, pupils were still allowed to exit the classrooms to go for their recess. 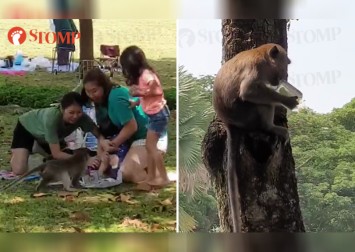 A domestic helper whom Shin Min Daily News spoke to outside the school said she had heard from her two charges enrolled in the school that in another recent incident, there had been three monkeys that were locked in one of the toilets.

The monkeys escaped when the door was later opened by a security guard, said the 28-year-old helper.

Parents interviewed by the Chinese-language paper expressed worry over the monkey sightings and have advised their children not to go close to the monkeys if they come across the animals.

One parent, a 39-year-old housewife, said she is concerned that children might scream when they see a monkey; this might then trigger the monkey to turn aggressive. Another said the monkeys are usually attracted to food and was worried they would attack.

According to Acres, those who come across wild monkeys should not shout, stare at or bare their teeth at them. They should also not feed the monkeys and always keep a safe distance.

It seems that more wild monkeys have been seen in public areas recently.

Videos of monkeys terrorising students here have also been circulating on TikTok. In one recent clip which looks to be taken in a secondary school, a monkey is seen rummaging through a school bag while students looked on from a distance.

Another video showed a male secondary school student in uniform 'negotiating' with two monkeys who had similarly gotten hold of a schoolbag, only to turn and run when one of the monkeys became aggressive.