Tokyo Olympics: Singapore's marathon swimmer Chantal Liew has a message for the doubters

TOKYO - A moment of levity turned sentimental at the Odaiba Marine Park in Tokyo on Wednesday (Aug 4) morning.

Chantal Liew, barely out of the water and still in her wetsuit, with a red Team Singapore jacket draped over her shoulders, had just crossed the finish line in the marathon swimming event at the Olympic Games.

She placed 23rd out of 25 swimmers in a time of 2hrs 8min 17.9sec, and made history as the first Singaporean to swim in the event at the Olympics.

Brazil’s Ana Marcela Cunha won the gold in 1:59:30.8, less than a second from a fast-charging and defending champion Sharon van Rouwendaal. The Dutchwoman clocked 1:59:31.7 with Australian Kareena Lee (1:59:32.5) third.

Water still dripping from her shoulder-length hair, Liew wore a broad smile when she was interviewed minutes after her gruelling 10km swim and said she was proud of her achievement, having defied critics back home who questioned her Olympic pursuit.

Then she turned to the media liaison next to her and asked: “Can I say it?”

“They can kiss my a**,” Liew said with a laugh, before her voice began to crack.

“I hope it shuts them up and I hope it shuts up all the armchair critics in Singapore,” she added with a tremor, as her coach Marcus Cheah laid a soothing arm on her back.

“It’s tough what we do. Athletes don’t want to perform badly, we all want to come here and perform our best. So I’m happy that I did what I did today. I can say the same, with confidence, for every other athlete that’s here in Tokyo right now.

“Sometimes your best is not good enough, sometimes it is… but you live and you learn, and at the end of the day, I love what I do… and no one can take that away from us.”

Liew, who turns 23 on Monday (Aug 9), has given up plenty in order to earn a place in Tokyo.

She had to juggle undergraduate studies at the National University of Singapore, an internship and training sessions as she worked toward her Olympic goal with Cheah, who has been her coach for about four years.

She also unloaded her university modules in order to ramp up preparations for the Games, where she did “intense heat swimming” in 35 deg C water and 90 per cent humidity, up to four times a week, in Singapore.

This bore fruit with her performance in Tokyo, where the Japanese summer has taken its toll on many visiting athletes.

“It’s an amazing result for me and Marcus because essentially we’re open water rookies, and for the past year we had to figure a lot of things out on our own,” said Liew, who earned a silver in the event at the 2017 SEA Games.

She timed 2:21:30 at the Kuala Lumpur Games and clocked 2:12:20 at the recent Fina Olympic Marathon Swim Qualifiers in June in Portugal. 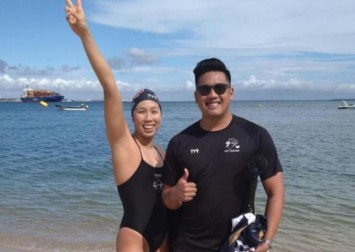 Tokyo was intended to be her retirement race, and for months she repeated she was ready to move on from sport.

Cheah, however, remained hopeful, pointing out that most of the field were 29 or 30 years old and Liew holding her own at 22 was a reason to be “extremely proud”.

Asked if she would consider changing her mind about retirement, Liew said: “I’m definitely thinking about that but… I think I need a long break, sit on it for a while before I make a final decision.”

But if that was her final race?

“I couldn’t have ended it on a better note.”