SINGAPORE - Toxic bacteria capable of causing coral bleaching and wound infections in humans have been found on microplastics picked up from the Republic's coastline between April and July 2018.

The plastic items were smaller than five millimetres each.

The research team also found species of marine Vibrio - known to be a major cause of wound infections in humans - and species of Arcobacter, a bacteria known to cause gastroenteritis.

The team consists of Dr Sandric Leong, research lead and Senior Research Fellow at the NUS Tropical Marine Science Institute, and Ms Emily Curren, a PhD student at the Institute and the Department of Biological Sciences at the NUS Faculty of Science. 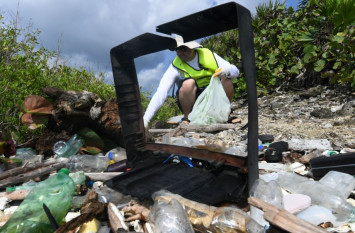 "As the microplastics we studied were collected from locations easily accessible to the public, and in areas widely used for recreation, the identification of potentially pathogenic bacteria is important in preventing the spread of diseases," said Ms Curren.

She added that the microplastics originated from disposable forks, spoons and straws, which can take hundreds of years to biodegrade.

These bits and pieces of plastic become "vehicles" for the toxic bacteria to thrive.

When swallowed by fish, the researchers say these harmful bacteria could find their way up the food chain - to humans.

"Marine organisms may consume bits of microplastics unintentionally, and this could lead to the accumulation and subsequent transfer of marine pathogens in the food chain."

"Understanding the distribution of microplastics, and identifying the organisms attached to them, are crucial steps in managing plastic pollution, on a national and global scale," Dr Leong added.