How does one explain to their kid the presence of soiled sanitary pads strewn across the foot of their residential block?

"It's not just clear discharge, it's red," one frustrated mother told CNA. "I've got kids who ask me 'Mum, what's that?'"

Since the circuit breaker period last year, residents of Punggol Sapphire have been plagued by a menstruating litterbug.

Speaking with CNA, a resident, who only wished to be known as Sue, said she had seen the pads lying on a grass patch and on top of drain covers at Block 268C.

She continued, "Then when I was working from home, I was putting up some blinds and I saw some (of the pads) stuck on other neighbours' window ledges."

“It’s not just clear discharge, it’s red … I’ve got kids who ask me, ‘Mum what’s that?’” says a Punggol resident.

Sue reported the issue via the OneService app in May and posted about it in the estate's Facebook group, complaining about how the pads were unrolled. Though the littering stopped, the pads appeared again in July — only this time, they were rolled up.

CCTVs were deployed following her second report and the area was free from such litter for a while, but the litterbug returned again in November and December. Sue then lodged her third report on the matter.

The National Environment Agency (NEA) responded via the app, stating that they were aware of the issue and had carried out several inspections, as well as issued advisories to residents. They added that they were currently studying the feasibility of using discreet CCTVs in the area. In the meantime, they said they would continue to monitor the issue and would not hesitate to take enforcement action.

Beyond just sanitary pads, residents also bemoaned the presence of other types of high-rise litter, including cup noodles, tissues, used face masks and even a microwave oven.

An elderly resident, who lives on a lower floor, told the news platform that she now refuses to hang her clothes outside in fear of getting her laundry soiled again.

Punggol residents aren't the first ones affected by a "bloody" litterbug. 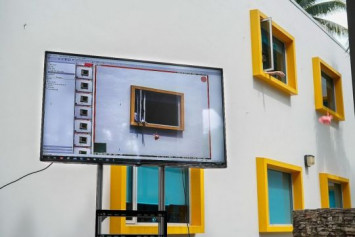 In 2017, the NEA said it received 10 complaints about high-rise littering from a block in Toa Payoh. A 28-year-old woman was caught on camera throwing her used sanitary pads out the window and subsequently fined $1,600, as well as sentenced to three hours of corrective work order.

The issue of soiled pads being thrown out windows was also brought up in Parliament, after former Member of Parliament Lee Bee Wah noticed that it was a persistent problem on her monthly litter-picking rounds.

Questioning the actions taken by the NEA over the matter, the MP uttered one of her most famous lines: "[It] looks like this problem will disappear only when the litterbug [enters] menopause."