#viral videos#Youth#Malls#In Case You Missed It

Watch out for the bike: Teens cycling in Plaza Singapura 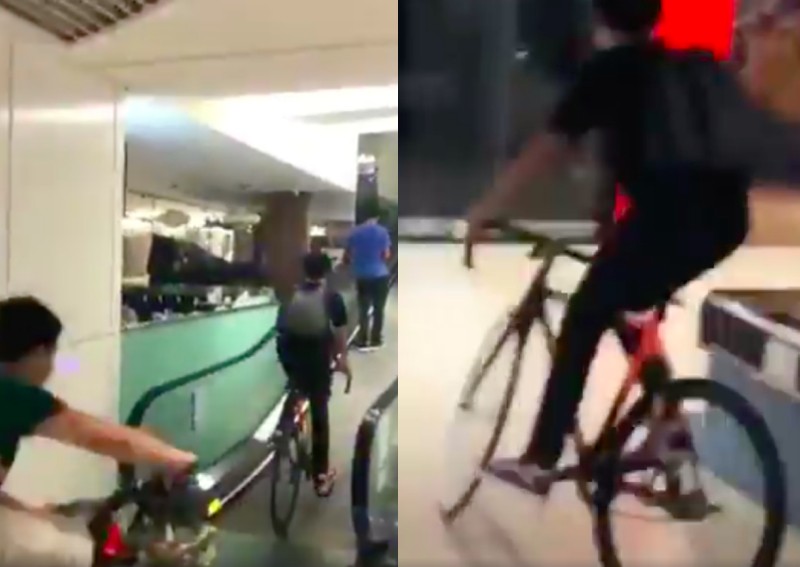 While cycling is a great exercise for all, location matters when we're riding our bicycles.

As Plaza Singapura was closing up for the night on Jan 17, a group of teenage boys were spotted riding their bicycles in the shopping mall.

In a clip that was posted on Facebook, a youth could be heard saying "We're here in the mall, enjoying some Burger King…" as two teenage boys whizzed past him on their bicycles.

As they paddled up the travellator from basement one, he told them: "No cycling allowed in the mall."

One of the boys dismounted and pushed his bicycle as the youth reiterated his point, saying: "Cannot bring bike into the mall, brother."

Once the cyclist reached level one, however, he hopped back onto his ride to make a hasty exit with his friend.

It is unclear if the boys' antics were filmed by someone they know.

After the clip made its rounds online, some Facebook users called the teens out for pulling a stunt to get attention, while others said their actions may hurt other shoppers in the mall and emphasised the need for the mall to step up its security.

A Plaza Singapura spokesperson told AsiaOne that the mall's investigations revealed that a group of teenagers were walking through the mall with their bicycles after operating hours on Jan 17.

"We would like to highlight that the riding of bicycles and other personal mobility devices within the mall premise is not allowed at all times."

The mall also urged the public to use the mall facilities appropriately to ensure their own safety and that of others.

So far, the activity is only allowed in Funan Mall where cyclists are encouraged to use its indoor cycling path at certain hours and also its related facilities. The feature is the mall's support for the Land Transport Authority's car-lite movement.