'Why did you just leave like that?' Newspaper deliveryman dies in van, wife breaks down on seeing body

He would usually deliver the Chinese papers to a shop in Aljunied at 9am every day.

The newspaper deliveryman was found lifeless in the driver's seat at a carpark located at Blk 119 Aljunied Ave 2 at around 3.20pm, Shin Min Daily News reported.

It was some six hours after he first parked his vehicle, according to eyewitnesses interviewed by the Chinese evening daily.

The boss of a furniture shop located next to the carpark said that he recognised the van and recalled seeing it in the carpark at around 9am that day.

"In the last one or two years, I'd often see the deliveryman in the mornings on his rounds and he would usually leave at around 10am," said the furniture shop owner surnamed Wu. However, he didn't remember seeing the deliveryman that morning.

Wu called the police soon after returning to the carpark at about 3pm, after he noticed the driver sitting motionless in the vehicle.

"That's six hours. I thought it was suspicious so I called the police."

The owner of a nearby sundry store, surnamed Zhang, was also among several eyewitnesses whom Shin Min Daily News spoke to.

He told the Chinese evening daily that he'd gone to the carpark to investigate after hearing that a van was parked there for a long time.

The engine and air conditioning were also running.

Read Also
Man suspected of having heart attack while driving, dies after crashing into lamp post in Yishun 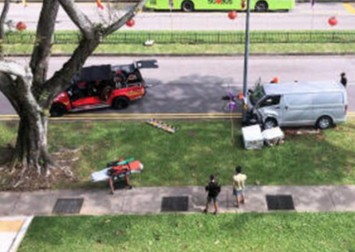 "I knocked on the window but the driver did not respond. I realised the door wasn't locked so I opened it. The driver didn't appear to be breathing," said Zhang, who added that he "yelled a few times" at the man.

He shared that a woman, believed to be the deliveryman's wife, arrived on the scene shortly after.

It was a heart-wrenching sight, said Zhang, as the woman broke down upon seeing her husband and wailed, "Why did you just leave like that?"

The woman continued to cry and hug her husband's body for at least 10 minutes before the police arrived.

When reporters arrived on the scene at around 6.30pm, the van was still parked in the carpark.

Shin Min reported that the man was supposed to deliver China Press newspapers to a nearby grocery shop that day.

But when the shop owner, surnamed Mo, didn't see him that morning, he assumed it was the deliveryman's rest day.

"Usually he'll arrive like clockwork (every day at 9am), but he didn't come that day so I thought he'd taken the day off".

The police confirmed that a 55-year-old man was found dead at the scene and investigations are ongoing.