SINGAPORE - When her mother first told her about an investment proposition from someone overseas, alarm bells went off immediately and she warned the older woman to stay away.

Unfortunately, the warning fell on deaf ears, and her mother, a businesswoman, was eventually scammed of $568,000.

Speaking to The Straits Times in a recent interview, the daughter, who wanted to be known only as Ms Ong, said there was nothing more she could have done to stop her mother from falling for the scam.

"I told my mother to be careful but she was confident, headstrong and had 100 per cent faith in her contact. It was obvious it was a scam. But I didn't want to argue because I didn't want to end up having a bad relationship with her," said the 30-year-old Singaporean, who runs a tuition agency in Yishun.

Her mother, who wanted to be known only as Ms Sophia, 62, said she transferred sums of money several times between January and May this year to a man based in China who gave his name as Lin Cheng. He is now uncontactable.

"I trusted him very much because he seemed very knowledgeable and kind-hearted. I did not expect him to be a scammer," said Ms Sophia, who lodged a police report on May 31.

Responding to queries from The Straits Times, the police confirmed a report had been made and investigations are ongoing.

Ms Sophia, a Singaporean, said she was first contacted by Lin Cheng via a WhatsApp message on Dec 16 last year. It was a foreign number and to this day, she does not know how he got her contact number.

They struck up a conversation and he told her he was a businessman based in Fuzhou, China. He claimed he was born in Singapore and his family had moved to China when he was four.

"He told me that he ran an orphanage with 40 kids in Chongqing. He had visited his sick grandfather in a Chongqing hospital and saw a few kids abandoned there. He empathised (with them) and decided to open an orphanage," said Ms Sophia.

They continued to talk and Ms Sophia, who has investments in properties and owns shares in a few companies, grew to trust the man.

She soon told him about her investments in China.

He said he wanted to help her earn more money, and on Jan 14 and 15, Ms Sophia transferred $5,000 and $13,000, respectively, to a person called Lin Yaolao, whom Lin Cheng claimed was a middleman who would help her trade in foreign exchange.

In March, Lin Cheng told her she had earned US$43,000 (S$58,700) on her investment, but about a week later, he said she was losing money and needed to inject more funds urgently.

She transferred $150,000 to him via another contact he provided.

"Then, on May 24, I received a message from him that he had late-stage pancreatic cancer and was in a hospital in Beijing. He sent me a picture of a man in hospital pajamas lying on a hospital bed and another of a doctor speaking to a man."

Three days later, Ms Sophia, who had never seen Lin Cheng before, saw a post on WeChat purportedly from his uncle saying that his nephew had died.

Distraught, she told her daughter and when Ms Ong saw the photos, she told Ms Sophia she had been scammed.

Said Ms Ong: "It was a stock image, it was so obvious from the photo angle and quality... I told myself, I must find the exact same photo on Google. I searched keywords like 'hospital' and 'man lying in hospital', and I found the exact same image in about 10 minutes. 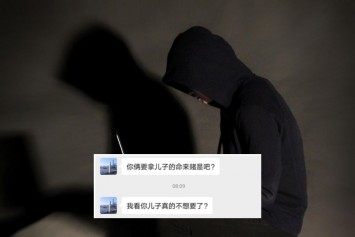 "My mother was devastated when I showed her the pictures."

Ms Sophia called the hospital and mortuary in Beijing, and both said there was no such patient on record.

She wondered how she could have been so easily duped and fell into depression. She even contemplated suicide.

Ms Sophia is better today, and hopes her experience will be a warning to others.

She said: "I want to remind Singaporeans that they should be careful. Especially if you are involved in a scam by a foreigner, the chances of getting your money back is very low."

Her daughter feels her mother is too trusting.

She said: "She trusts people easily. She trusted the person and didn't listen to me, so I could not say any more."

"I just hope that this will not happen again. I told her that if any strangers message her, she must let me know. I hope she will listen next time."